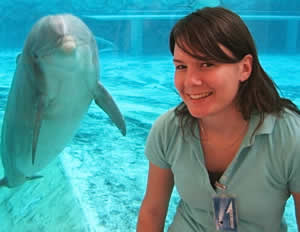 LUND, Sweden -- Dolphins and porpoises use echolocation for hunting and orientation. By sending out high-frequency sound, known as ultrasound, dolphins can use the echoes to determine what type of object the sound beam has hit. Researchers from Sweden and the US have now discovered that dolphins can generate two sound beam projections simultaneously.

"The beam projections have different frequencies and can be sent in different directions. The advantage is probably that the dolphin can locate the object more precisely", says Josefin Starkhammar, a newly examined doctor in Electrical Measurements at Lund University, who also holds a Master's degree in Engineering Physics.

The study, which was carried out together with scientists from San Diego, was published in the latest issue of the journal Biology Letters. The co-authors of the article were Patrick W. Moore, Lois Talmadge and Dorian S. Houser, who work at the National Marine Mammal Foundation in the USA.

"The findings add fuel to an already fierce debate in the research community on how the echolocation sound is produced", says Josefin Starkhammar.

Dr Starkhammar's own guess is that the two sound projections come from the two different sound-producing organs, the existence of which is well known, but it was believed that only one was active during echolocation. She stresses that more research is needed. For example, the two projections could also be explained by complicated reflections in the head of the dolphin, where the sound is formed.

"It is also somewhat remarkable that this has only been discovered now. Research has been carried out on dolphins and echolocation since the 1960s", says Josefin Starkhammar.

One explanation as to why the discovery has taken so long is that this research requires recently developed and quite advanced measuring equipment and signal processing techniques. In addition, until now it has mostly been biologists who have conducted research on dolphins, and their expertise is often not in this specific area of technology. Furthermore, the research requires dolphins trained to answer scientific questions! The combination of marine biologists and engineers is ideal, in Josefin Starkhammar's view.

To help her she has developed a device with 47 hydrophones (microphones for use in water).

"It is currently one of the best devices in the world for capturing dolphins' ultrasound in water", says Josefin Starkhammar, who has spent a lot of time testing and developing the equipment, including at KolmÃ¥rden Wildlife Park, where one of her supervisors works. There she has also conducted other studies on dolphins and their echolocation.

"However, dolphins' echolocation is in many ways much more sophisticated. Evolution has had the possibility to hone it over millions of years. Therefore, we humans have a lot to learn from dolphins. What is more, the knowledge could be important in finding ways to protect dolphins, for example from noise disturbance", says Josefin Starkhammar.