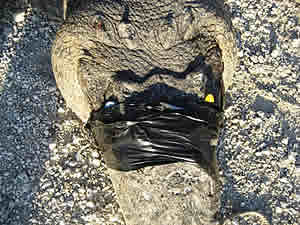 This captured crocodile has magnets taped to its head before translocation to another site. Credit: FWC

MIAMI, Florida -- Magnets usually attract, but the Florida Fish and Wildlife Conservation Commission (FWC) want magnets to do just the opposite. FWC biologists are studying if magnets can keep state-endangered American crocodiles from returning to situations where they are not welcome, primarily in neighborhoods in Miami-Dade and Monroe counties.

Crocodile-human interactions have increased as the crocodile population has recovered. One technique to resolve these conflicts is translocation. This involves capturing the crocodile and moving it to suitable crocodile habitat as far away as possible, in an attempt to keep it away from an area. However, translocation is seldom effective. FWC biologists have found that translocated crocodiles will travel an average of 10 miles per week to return to their capture site, in a practice called "homing." Others never make it because they are hit and killed by vehicles as they cross roads. Some may be killed by other crocodiles at the release site or during their journey back.

"Scientists in Mexico have reported success in using magnets to break the homing cycle," said Lindsey Hord, FWC crocodile response coordinator. "The results of the study are promising. If it proves successful here, we could gain an effective technique to resolve crocodile-human conflicts."

If a nuisance crocodile continues to return to the capture site, or its behavior presents an unacceptable risk to people, under certain circumstances, it could be removed from the wild and placed into captivity.