Study: 'Ray' Wings Sold To Consumers Include Vulnerable Species And Can Be Mislabeled 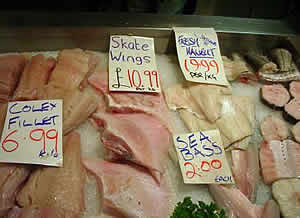 This image shows the diversity of skate products available in a typical U.K. supermarket.

Genetic testing by DNA Barcoding, has revealed which species are sold under the commercial term 'ray wings' in Ireland and the UK. The blonde ray, given the lowest rating for sustainability in the marine conservation society's good fish guide, was the most widely sold. Samples from the only retailer to label products as originating from more sustainable sources demonstrated high levels of mislabeling, substituted by more vulnerable species. Therefore, consumers cannot make informed purchasing decisions. The research was conducted at the University of Salford and University College Dublin, as part of an international project called "LabelFish" that is currently investigating seafood labeling and traceability within the European Union (EU). The study, titled "DNA Barcoding unveils skate (Chondrichthyes: Rajidae) species diversity in 'ray' products sold across Ireland and the UK" was published today in PeerJ.

The lead author of the paper, Dr Andrew Griffiths, explained the motivation behind the work -- "the commercial title 'ray' is really an umbrella term that includes a large number of fish that are scientifically known as 'skates', a relative of the sharks. These skates are valued for their large fins or wings, so their bodies are usually discarded and they are skinned before sale, making it impossible to identify what species are being sold." He went on to explain that "many of the largest growing species of skate have undergone massive declines in abundance, becoming locally extinct for large parts of their former range. In response the European Union has prohibited the landing of some of the most endangered species and requires closer monitoring of landings of all skates. We wanted to investigate exactly which species are being passed on to consumers."

This work, inspired by a pioneering study in New York conducted by two high school students who analyzed samples of sushi, also involved several undergraduates (who are listed as co-authors on the article and were supervised by Prof Stefano Mariani) to collect samples and conduct DNA barcoding on them. DNA barcoding is now a relatively straightforward process which allows rapid and robust species identifications to be made by using a single short sequence of DNA, meaning it is a great tool for students to investigate food authenticity and mislabeling.

The findings showed that none of the ray wings analyzed originated from endangered species that were prohibited from being landed in the EU. This is good news for the conservation of groups of skate that are of most critical conservation concern. However, the results were not all positive; the most commonly identified species in the study was the blonde ray (Raja brachyura), a large-growing species that has a decreasing population trend and which the marine conservation society (MSC) awards its lowest sustainability rating, suggesting consumers should avoid purchasing it. In fact, size has previously been suggested as a good proxy for risk to overfishing, and the blonde ray was just one of three large growing species identified during investigations. All three are associated with declining abundance and concerns over sustainability.

The study concludes that the use of ambiguous or amalgamated sales terms makes it impossible for consumers to exercise the right to choose species of lesser conservation concern helping to protect these declining species. Dr Griffiths added that "currently there is a dichotomy; the EU generally requires skates to be identified to the species level when landed, but this information is not being passed onto consumers. This remains a real obstacle in allowing consumers to make informed choices." Interestingly, some supermarket chains have already made commitments to supply smaller growing species that are viewed as more sustainable. One retailer even went as far as labelling its ray wings as originating from these smaller growing groups. Analysis of a limited number of wings purchased from this supermarket showed a third were mislabelled; they really belonged to a more vulnerable larger growing species. This highlights the importance of on-going efforts to improve labelling of foods, not only to protect consumers, but also to allow informed choice and promote the conservation of vulnerable species.