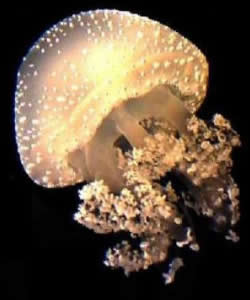 DAUPHIN ISLAND, Alabama -- The invasive Australian jellyfish, Phyllorhiza punctata, first reported in great quantities in the Gulf of Mexico in 2000, has made a vigorous reappearance this summer in waters from southwestern Louisiana to Morehead City, North Carolina. Beachgoers and boaters are encouraged to report their sightings of these exotic jellies to the Dauphin Island Sea Lab’s jellyfish website, Dockwatch, at http://dockwatch.disl.org.

Since 2000, Phyllorhiza sightings have occurred in the Gulf as far west as Galveston Bay, Texas, but only in a handful of numbers. This year, not only are their numbers higher, but their range has extended up to the Mid-Atlantic states. “Reports from the Panhandle of Florida and North Carolina indicate they’re pretty concentrated elsewhere,” states Dauphin Island Sea Lab Senior Marine Scientist Dr. Monty Graham.

Ranging in size from a softball to a basketball, the Australian jellyfish present little to no danger in terms of their sting. A preponderance of jellies, however, could pose a threat to the commercial fishing and shrimping industry as they foul up trawling nets and consume eggs and larvae of important fishery species.

“We just started getting reports of Phyllorhiza appearing on the east coast of Florida and as far up as North Carolina this year. We don’t think that jellies from the Gulf are pouring up the coast, necessarily, but the appearances and concentrations of these animals in both places may be related,” says Dr. Graham.

“Phyllorhiza are prolific feeders; they can compete with commercially important fish for food, and they also eat the larvae of these fish. In their native waters, they tend to be fist-sized; here in the Gulf, they can be a big as dinner plates.”

“We absolutely depend on the public’s reporting the appearance of these creatures. We don’t have the resources to survey the waters continuously, and by tracking their numbers and locations, we can try to get a handle on why they’re here in such concentrations and what impact they have on the ecosystem,” he concludes.