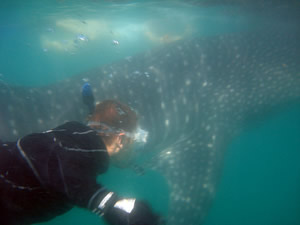 TERRE HAUTE, Indiana -- While Darin Lang is walking around the Indiana State University campus, a whale shark named Darin is swimming somewhere in the oceans of the world.

Lang, a senior geology major from Terre Haute, named a whale shark after himself while researching the species this summer in Mexico.

Much of the research Lang conducted in Bahia de Los Angeles, Mexico with whale sharks involved identifying them. That mean Lang got very up close and personal with the sharks.

"The first one I saw made me so excited I kept choking on water," Lang said.

Lang became so good at identifying one certain shark, even spotting it from the surface, that he was given the opportunity to name that shark. So he did, after himself. Every whale shark has a unique spot and stripe pattern, which is used to identify them. Darin the shark has a pattern that looks like a backward number four, Lang said.

At the research station in Mexico, divers take pictures of this pattern under the left gill and then put that picture into a database. The database keeps track of each time a particular shark is identified at that location so that its travel patterns can be seen.

It is unknown whether whale sharks stay in groups or pods like a killer whale would, or if they are solitary, Lang said.

"Once you identify the shark, you can see that it may have been there in 2007 and then we will see all the sharks that it was back with and try to correlate that with the sharks it was there with originally in 2007."

Although this was his second trip to another country, it still held first time experiences for Lang; most notably, it was the first time he swam with a fish larger than he was.

"The smallest shark we saw was probably 14 feet and that was one of the first ones we saw," Lang said. "We were swimming with a 14-foot shark and they were like 'that's a little one' and it was twice my size."

The largest shark Lang recalls seeing was about 30 feet in length. To most, a 30-foot shark would be intimidating but whale sharks are filter feeders, eating mostly plankton and very small plants and animals.

"The smaller they were it seemed like the more timid they were, if you brushed against them on accident they would dive down or kind of freak out and flip their tail around," Lang said. "The larger ones...you could run your hand all the way down its side and it would just sit there and keep eating, they were really, really calm."

After researching the sharks this summer, Lang's dream job is now to wake up and swim with whale sharks every day. Not much is known about whale sharks and anything that is unknown is exciting to research, Lang said.

"Every day you would have something to look forward to and worst case scenario, you don't find any sharks but you still see whales and dolphins and go snorkeling in shoulder height water and see these amazing coral reefs and the whole time you are actually doing research," Lang said. "The whole time you are helping figure stuff out that has never been done before while you are having all this fun."

Since his freshman year, Lang has participated in research cruises, with the whale shark research being his fourth experience. He also has conducted research in Antarctica and a one-week research cruise in the Atlantic Ocean.

"These hands-on research experiences not only provide students with useful skills, but also enable students to experience what it would be like to work in their field of interest," said Tony Rathburn, associate professor of geology. "Experiential learning opportunities and direct communication with a diverse array of students and professionals help students make more informed career choices."

"The chances of getting into those are pretty slim," Lang said. "It is highly, highly competitive."

Rathburn thinks that the experiential learning Lang has undergone as a student at ISU will help him achieve his goal of becoming a marine scientist who enjoys his job.

"Each new learning experience provides another significant notch on a resume, and makes the student a stronger candidate for the next opportunity," Rathburn said