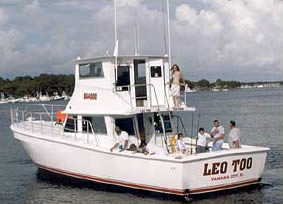 Christopher Kevin Weaver, captain of the Leo Too, pleaded guilty to shooting at a dolphin

Christopher Kevin Weaver, captain of the Leo Too, a charter boat operating out of Treasure Island Marina, was placed on two years of probation and fined $1,000 for violating the federal Marine Mammal Protection Act (MMPA) for shooting at several dolphins on Oct. 13, 2005. As a condition of his probation, Weaver may not possess a firearm for two years.

Standing on the bridge of the Leo Too, Weaver fired a .38 caliber handgun at a dolphin while it was in the water near the boat, according to a news release from the Department of Justice. When the Leo Too moved to another fishing spot, Weaver again shot at one or more dolphins. It is unknown whether his shots struck any of the dolphins.

Weaver pleaded guilty to one misdemeanor count of violating the MMPA on Aug. 8, 2006. The case was investigated by the National Oceanic and Atmospheric Administration, Office of Law Enforcement and prosecuted by Mary Dee Carraway, Trial Attorney for the Justice Department's Environmental Crimes Section.

The MMPA prohibits the taking of any marine mammal, including dolphins, in waters or lands under the jurisdiction of the United States. "Take" as defined in the Act, means to harass, hunt, capture or kill or attempt to harass, hunt, capture, or kill any marine mammal. "Harassment," also defined by the Act, means any act, pursuit, torment or annoyance which has the potential to injure a marine mammal in the wild or has the potential to disturb a marine mammal by causing disruption of behavioral patterns, including, but no limited to, migration, breathing, nursing, breeding, feeding or sheltering.