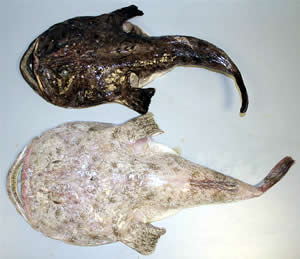 The crew of a Shetland fishing boat may have thought they had seen a ghost when they hauled up their nets last week.

Amongst the seething mass of white fish squirming on the deck of the newly built Copious LK985 was one fish which was even whiter than the rest.

Yesterday (Tuesday) fisheries scientist and monkfish specialist Chevonne Laurenson displayed the fish at the NAFC Marine Centre, in Scalloway, revealing it to be a rare albino monkfish.

Dr Laurenson said it was around five years old and would now be added to the center's reference collection.

"Albino monkfish have been recorded before but, as with albinos in other species, they are rare," she said.

Albinos of all species, including humans, share an inability to form the dark pigment called melanin.