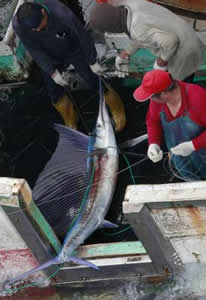 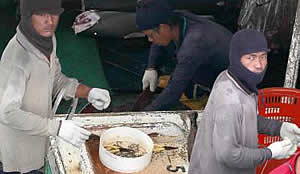 Workers are seen by two dead shark carcasses and a bag of shark fin aboard the Taiwanese vessel âSheng Chi Hui No. 7′. Â© Alex Hofford /Greenpeac

AMSTERDAM, The Netherlands -- Palauan fisheries officials have boarded and detained a Taiwanese fishing vessel suspected of illegal fishing activities during a joint patrol with Greenpeace of the Pacific Island nation's exclusive economic zone.

A Greenpeace helicopter flight spotted the sharks and fins on board the Sheng Chi Hui on the morning of December 8th, while the fishing vessel was inside Palaun waters - which were declared a shark sanctuary in 2009.

"The Sheng Chi Hui was in apparent breach of the law here in Palau's exclusive economic zone. Illegal fishing is costing the future of our people, our country's economic development and is a threat to the future of the legitimate fishing industry. It must be stopped," said Palau President Johnson Toribiong.

Greenpeace and the Government of Palau signed a joint agreement earlier this week to both enforce fisheries regulations and bring illegal pirate fishing operations to justice.

"We are honored to be working with Greenpeace in the protection of our fisheries resources and securing the livelihood and future of our people. Let this be a warning to illegal operators," President Toribiong continued.

Between 21 per cent and 46 per cent of all fishing in the Western Central Pacific Ocean is thought to be Illegal, Unregulated and Unreported (IUU)[1]. The illegal plunder of fish from the Pacific is putting the region's food security and economic prosperity at risk.

Like most Pacific Island countries Palau must patrol vast territorial waters with very limited capacity; it has one patrol boat and more than 604,000 km2 of ocean to patrol.

"Illegal fishing carried on by vessels like the Sheng Chi Hui is rampant in parts of the Pacific, with the slaughter of sharks and the theft of tuna occurring on a daily basis", said Lagi Toribau, Greenpeace campaign leader on board the Esperanza.

"If this continues, we will see a Pacific region with empty nets, empty plates and empty bellies. We applaud the Palauan government for taking a stand and enforcing its laws. Now we are calling on the Taiwanese government - as the responsible flag state - to better regulate its fishing industry".

The Sheng Chi Hui will undergo further investigation by Palauan officials on its arrival in the country.Yesterday, officials from the Remeliik boarded an unlicensed Philippine flagged reefer, F-B Yanreyd 291, confiscated its fishing gear and catch and escorted it out of Palau's waters.

Greenpeace's "Defending Our Pacific" tour is campaigning to prevent the plunder of Pacific tuna and for the restoration of the health of the world's oceans through the creation of marine reserves.

The international environment group is calling for marine reserves to be established in four high seas pockets of the Pacific Commons, and be declared off limits to fishing. The environmental group is also seeking a ban on the use of FADs in purse seine fisheries and a 50 per cent reduction across entire tuna fisheries. These measures are important to keep valuable fish stocks at a sustainable level.

Greenpeace is campaigning for a global network of marine reserves covering 40 per cent of the world's oceans and for a more sustainable fishing industry, both necessary steps to restoring our oceans to health. Around the world, Greenpeace is working with retailers and tuna brands across Europe, Australia and the Americas to increase the market share of sustainably-sourced tuna.