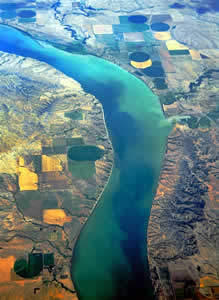 Farming practices have changed the chemistry of the Mississippi River and the Gulf of Mexico. Credit: Jerry Ting

ARLINGTON, Virginia -- Midwestern farming, and increased water flowing into the Mississippi River as a result, have injected the equivalent of five Connecticut Rivers' worth of carbon dioxide into the Mississippi each year over the last 50 years, according to a study published this week in the journal Nature.

The research is funded by the National Science Foundation (NSF).

"It's like the discovery of a new large river being piped out of the corn belt," said Peter Raymond, lead author of the study and an ecologist at Yale University. "Agricultural practices have significantly changed the hydrology and chemistry of the Mississippi."

The research team analyzed Mississippi River data as much as 100 years old. The data had been warehoused at two New Orleans water treatment plants.

"This impressive effort has led to important conclusions about the influence of land-use practices on carbon dioxide in the environment," said Martyn Caldwell, program director in NSF's division of environmental biology. "The implications for other materials being transported into river systems are significant."

The researchers tracked changes in the levels of water and bicarbonate, which forms when carbon dioxide in water in soil dissolves minerals. Bicarbonate plays an important, long-term role in absorbing atmospheric carbon dioxide, a greenhouse gas. Oceans then absorb carbon dioxide but become more acidic in the process.

"Ocean acidification makes it difficult, for example, for certain organisms to form hard shells," said Eugene Turner, a co-author of the paper and a marine ecologist at Louisiana State University.

The researchers concluded that liming and farming practices, such as changes in drainage and crop type and rotation, are likely responsible for the majority of the increase in water and carbon in the Mississippi.

In addition to Raymond and Turner, co-authors of the paper, "Anthropogenically Enhanced Fluxes of Water and Carbon from the Mississippi River," are Neung-Hwan Oh of Yale and Whitney Broussard of Louisiana State University.