How Iron Gets Into The North Pacific: Is The Dust-storm Theory Overblown? 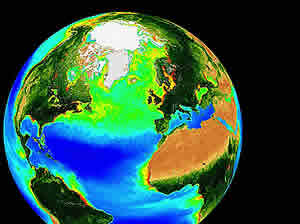 A north Atlantic Ocean view of the spring phytoplankton bloom, as seen from a satellite image. credit:Oregon State University

CORVALLIS, Oregon -- A new study concludes that an old, fundamental and widely accepted theory of how and why phytoplankton bloom in the oceans is incorrect.

The findings challenge more than 50 years of conventional wisdom about the growth of phytoplankton, which are the ultimate basis for almost all ocean life and major fisheries. And they also raise concerns that global warming, rather than stimulating ocean productivity, may actually curtail it in some places.

This analysis was published in the journal Ecology by Michael Behrenfeld, a professor of botany at Oregon State University, and one of the world's leading experts in the use of remote sensing technology to examine ocean productivity. The study was supported by NASA.

The new research concludes that a theory first developed in 1953 called the "critical depth hypothesis" offers an incomplete and inaccurate explanation for summer phytoplankton blooms that have been observed since the 1800s in the North Atlantic Ocean. These blooms provide the basis for one of the world's most productive fisheries.

"The old theory made common sense and seemed to explain what people were seeing," Behrenfeld said.

"It was based on the best science and data that were available at the time, most of which was obtained during the calmer seasons of late spring and early summer," he said. "But now we have satellite remote sensing technology that provides us with a much more comprehensive view of the oceans on literally a daily basis. And those data strongly contradict the critical depth hypothesis."

That hypothesis, commonly found in oceanographic textbooks, stated that phytoplankton bloom in temperate oceans in the spring because of improving light conditions â longer and brighter days â and warming of the surface layer. Warm water is less dense than cold water, so springtime warming creates a surface layer that essentially "floats" on top of the cold water below, slows wind-driven mixing and holds the phytoplankton in the sunlit upper layer more of the time, letting them grow faster.

There's a problem: a nine-year analysis of satellite records of chlorophyll and carbon data indicate that this long-held hypothesis is not true. The rate of phytoplankton accumulation actually begins to surge during the middle of winter, the coldest, darkest time of year.

The fundamental flaw of the previous theory, Behrenfeld said, is that it didn't adequately account for seasonal changes in the activity of the zooplankton â very tiny marine animals â in particular their feeding rate on the phytoplankton.

The new theory that Behrenfeld has developed, called the "dilution-recoupling hypothesis," suggests that the spring bloom depends on processes occurring earlier in the fall and winter. As winter storms become more frequent and intense, the biologically rich surface layer mixes with cold, almost clear and lifeless water from deeper levels. This dilutes the concentration of phytoplankton and zooplankton, making it more difficult for the zooplankton to find the phytoplankton and eat them; thus more phytoplankton survive and populations begin to increase during the dark, cold days of winter.

The processes at work there are somewhat similar to the importance of wind-driven upwelling in Pacific Northwest ocean waters, which brings up nutrients and enhances phytoplankton growth. However, in the north Atlantic Ocean these other, complex processes are also at work, including the dilution of phytoplankton and the ultimate control of them by aggressive zooplankton grazing.

"What the satellite data appear to be telling us is that the physical mixing of water has as much or more to do with the success of the bloom as does the rate of phytoplankton photosynthesis," Behrenfeld said. "Big blooms appear to require deeper wintertime mixing."

That's a concern, he said, because with further global warming, many ocean regions are expected to become warmer and more stratified. In places where this process is operating â which includes the North Atlantic, western North Pacific, and Southern Ocean around Antarctica â that could lead to lower phytoplankton growth and less overall ocean productivity, less life in the oceans. These forces also affect carbon balances in the oceans, and an accurate understanding of them is needed for use in global climate models.

Worth noting, Behrenfeld said, is that some of these regions with large seasonal phytoplankton blooms are among the world's most dynamic fisheries.

The critical depth hypothesis would suggest that a warmer climate would increase ocean productivity. Behrenfeld's new hypothesis suggests the opposite.

Behrenfeld said that oceans are very complex, water mixing and currents can be affected by various forces, and more research and observation will be needed to fully understand potential future impacts. However, some oceanographers will need to go back to the drawing board.

"With the satellite record of net population growth rates in the North Atlantic, we can now dismiss the critical depth hypothesis as a valid explanation for bloom initiation," he wrote in the report.