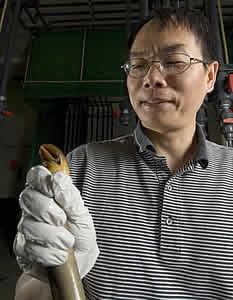 EAST LANSING, Michigan -- Michigan State University researchers are the first to identify a stress hormone in the sea lamprey, using the 500 million-year-old species as a model to understand the evolution of the endocrine system.

Corticosteroid hormones control stress response in animals with backbones, including humans. While scientists have learned quite a bit about these so-called stress hormones in most modern animals, little was known about the hormones' earliest forms in prehistoric creatures such as lamprey.

"By identifying 11-deoxycortisol as a stress hormone in lamprey, it allows us to better understand how the endocrine system in vertebrates evolved into the complex systems we see in humans today," explained Weiming Li, professor of fisheries and wildlife who helped lead the project. Li also is a member of the Michigan Agricultural Experiment Station.

The research is published in the July 19 edition of the Proceedings of the National Academy of Sciences.

Native to the Atlantic Ocean, sea lampreys are invasive species in the Great Lakes. They stay alive by attaching themselves to other fish, such as salmon and trout, and then suck out the fish's body fluids. One sea lamprey can kill 40 or more pounds of fish. The U.S. and Canadian governments spend about $10 million to $15 million per year on lamprey control.

Li led the groundbreaking research that identified the pheromone male lampreys use to attract females to their nests to mate. He has made a synthetic version of the pheromone and is testing its effectiveness as a control for the destructive parasites. While the identification of 11-deoxycortisol likely won't directly help his lamprey control work, Li said this new discovery will bolster understanding on how the fish has successfully adapted since the Paleozoic Era.

"Most jawless animals similar to the lamprey didn't survive into the modern era, so they're not available for us to use as we strive to learn more about how human systems developed," Li said. "The sea lamprey, a survivor, gives us a snapshot of what happened as vertebrates evolved into the animals we know today."

Li and his team plan to continue studying the lamprey, possibly investigating how the endocrine and other body systems became more integrated and successfully adapted to the changing environment.