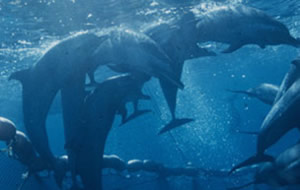 SAN DIEGO, California -- Despite broad “dolphin safe” practices, fishing activities have continued to restrict the growth of at least one Pacific Ocean dolphin population, a new report led by a researcher at Scripps Institution of Oceanography at UC San Diego has concluded.

Populations of dolphins in the Eastern Pacific were expected to increase in abundance after successful regulations and agreements were enacted to reduce dolphin deaths as a result of fishing “bycatch,” cases in which animals are caught unintentionally along with intended targets.

But the new study, published in the October issue of Marine Ecology Progress Series, reveals that negative impacts from fishing activities remain. Instead of reducing numbers through direct mortalities, the study by Katie Cramer of Scripps Institution of Oceanography and Wayne Perryman and Tim Gerrodette of the National Oceanic and Atmospheric Administration’s (NOAA’s) Southwest Fisheries Science Center shows that fishing activities have disrupted the reproductive output of the northeastern pantropical spotted dolphin. The researchers note that reproductive output of the eastern spinner dolphin also declined, but a direct link to fishing effort was inconclusive.

“The results of this study clearly show that depleted dolphin populations have failed to recover in part due to a decline in reproductive output, and that fishing has had an effect on reproduction,” said Cramer, a graduate student researcher in the Scripps Center for Marine Biodiversity and Conservation. “This shows that the fisheries indeed are still having an impact.”

The new conclusions are based on broad surveys conducted by NOAA Fisheries Service between 1987 and 2003 designed to assess the size and health of dolphin populations in the eastern Pacific Ocean. The surveys included military reconnaissance camera images of more than 20,000 animals.

Cramer, who participated in helicopter surveys between 1998 and 2003, and her colleagues used the image database to analyze entire dolphin schools, focusing in particular on mother-calf pairs.

The scientists compared the data with the number of fishing events in which a dolphin school is chased by speedboats and encircled in a large “purse-seine” net in order to capture the large yellowfin tuna that often swim with dolphin schools. While such fishing led to high dolphin mortalities after purse-seine fishing was launched in the eastern tropical Pacific in the 1950s, bycatch deaths declined by the end of the 1990s due to new fishing techniques that ensured that dolphins are eventually released from the nets alive.

Yet despite mortality reductions, dolphin populations have not recovered at a rate expected since bycatch was reduced.

Using the aerial photographic database, Cramer and her colleagues found a strong link between the amount of fishing and reproductive output in a given year for the dolphin population most heavily targeted by the fishery, the northeastern pantropical spotted dolphin. Both the proportion of adult animals in the photographs with a calf, and the length at which calves disassociated from their mothers (a measure of the length at which the calves stop nursing), declined with increasing fishing effort.

Together, the results showed that fishing had a negative impact on calf survival rates and/or birth rates. This could be caused when fishing operations separate mothers from their suckling calves, interfere with the conception or gestation of calves or a combination of the two.

“The link between fishing activity and … reproductive output indicates that the fishery has population-level effects beyond reported direct kill,” the authors write in their report.

What remains unknown is the exact mechanism leading to reduced reproductive output. This question is currently being investigated by researchers at NOAA Fisheries’ Southwest Fisheries Science Center in La Jolla.