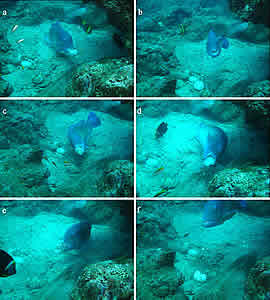 SYDNEY, Australia -- Fish are not renowned for their smarts, but new evidence suggests that they may even be able to use simple tools.

In a paper published today in the journal Coral Reefs, researchers from Macquarie University and Central Queensland University report on a tusk fish smashing open shells on an anvil to access the meat inside.

Tool use has long been associated with the rise of humans and a sure sign of intelligence. For a long time it was thought to be unique to humans, but studies soon showed that primates also used tools for various tasks such as cracking open nuts. More recently it has been revealed that a variety of birds also manufacture and use tools (eg New Caladonian Crows), which suggests that tool use in animals may be more common that once thought.

"The pictures provide fantastic proof of these intelligent fish at work using tools to access prey that they would otherwise miss out on," said Dr Culum Brown of Macquarie University.

"It is apparent that this particular individual does this on a regular basis judging by the broken shells scattered around the anvil."

Tool use is inherently difficult underwater especially for animals that lack hands but these fish have found an ingenious solution. The tusk fish holds the shell in its mouth and twists its head violently to land alternating blows on the shell until it cracks open.

"We really need to spend more time filming underwater to find out just how common tool use is in marine fishes," says Dr Brown, "It really is the final frontier down there."