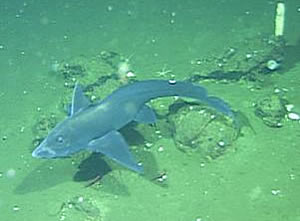 This is an Eastern Pacific black ghostshark (Hydrolagus melanophasma), a new species from California and Baja California. Credit: MBARI

SAN FRANCISCO, California -- New species are not just discovered in exotic locales—even places as urban as California still yield discoveries of new plants and animals. Academy scientists recently named a new species of chimaera, an ancient and bizarre group of fishes distantly related to sharks, from the coast of Southern California and Baja California, Mexico. The new species, the Eastern Pacific black ghostshark (Hydrolagus melanophasma), was described in the September issue of the international journal Zootaxa by a research team including Academy Research Associates David Ebert and Douglas J. Long. Additional co-authors included Kelsey James, a graduate student at Moss Landing Marine Laboratories, and Dominique Didier from Millersville University in Pennsylvania. This is the first new species of cartilaginous fish to be described from California waters since 1947.

Chimaeras, also called ratfish, rabbitfish, and ghostsharks, are perhaps the oldest and most enigmatic groups of fishes alive today. Their closest living relatives are sharks, but their evolutionary lineage branched off from sharks nearly 400 million years ago, and they have remained an isolated group ever since. Like sharks, chimaeras have skeletons composed of cartilage and the males have claspers for internal fertilization of females. Unlike sharks, male chimaeras also have retractable sexual appendages on the forehead and in front of the pelvic fins and a single pair of gills. Most species also have a mildly venomous spine in front of the dorsal fin. Chimaeras were once a very diverse and abundant group, as illustrated by their global presence in the fossil record. They survived through the age of dinosaurs mostly unchanged, but today these fishes are relatively scarce and are usually confined to deep ocean waters, where they have largely avoided the reach of explorers and remained poorly known to science.

This new species belongs to the genus Hydrolagus, Latin for 'water rabbit' because of its grinding tooth plates reminiscent of a rabbit's incisor teeth. This new species was originally collected as early as the mid 1960s, but went unnamed until this year because its taxonomic relationships were unclear. A large blackish-purple form, Hydrolagus melanophasma (melanophasma is Latin for 'black ghost'), is found in deep water from the coast of Southern California, along the western coast of Baja California, and into the Sea of Cortez (Gulf of California). This species is known from a total of nine preserved museum specimens, and from video footage taken of it alive by a deep-water submersible in the Sea of Cortez.

Renewed exploration of the world's deep oceans and more extensive taxonomic analysis of chimaera specimens in museum collections have led to a boom in the number of new chimaera species discovered worldwide in the last decade, including two species from the GalÃ¡pagos Islands named by Didier, Ebert, and Long in 2006 that were originally collected by Academy scientist John McCosker. With further advances in research and discovery, perhaps more will be known about these living fossils and their diversity in the world's oceans.