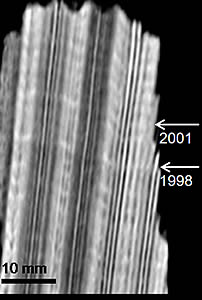 WOODS HOLE, Massachusetts -- In a pioneering use of computed tomography (CT) scans, scientists at Woods Hole Oceanographic Institution (WHOI) have discovered that carbon dioxide (CO2)-induced global warming is in the process of killing off a major coral species in the Red Sea. As summer sea surface temperatures have remained about 1.5 degrees Celsius above ambient over the last 10 years, growth of the coral, Diploastrea heliopora, has declined by 30% and "could cease growing altogether by 2070" or sooner, they report in the July 16 issue of the journal Science.

"The warming in the Red Sea and the resultant decline in the health of this coral is a clear regional impact of global warming," said Neal E. Cantin, a WHOI postdoctoral investigator and co-lead researcher on the project. In the 1980s, he said, "the average summer [water] temperatures were below 30 degrees Celsius. In 2008 they were approaching 31 degrees."

Cantin and WHOI Research Specialist Anne L. Cohen, the other lead investigator, said the findings were unexpected because D. heliopora did not exhibit one of the typical signs of thermal stress: bleaching. "These corals looked healthy," said Cohen.

But CT scanning of the coral's skeletal structure in the laboratory revealed "the secrets that the skeletons are hiding," she said. "The CT scans reveal that these corals have actually been under chronic stress for the last 10 years, and that the rates of growth were the lowest in 2008," the final year of the study.

The other WHOI researchers who participated in the study are climate dynamicist Kristopher B. Karnauskas, coral biologist Ann M. Tarrant and chemical oceanographer Daniel C. McCorkle.

Cohen and WHOI graduate student Casey Saenger had previously used CT scanning to quantify skeletal growth in Atlantic corals, but she credits Cantin with "pioneering" the technique for this type of oceanographic research. "He really took it to another level," she said. "What Neal really did was to adapt the imaging software, previously developed for bodies, specifically for our coral needs. This was an excruciatingly difficult task but it certainly paid off. We could not have used conventional techniques on this coral. The skeletal architecture is too complicated."

Historically, scientists have used x-rays to examine coral skeletons, which display annual growth bands much like tree rings, Cantin explained. But that method usually entails cutting into the skeleton, he said. CT allows non-invasive 3-D observation of the skeletons and bands.

"The biggest advantage we have over x ray is that we can scan intact cores without cutting the core into thin slices," said Cantin. "Since corals do not grow in a straight line, when the core is cut, inevitably the growth axis will be lost from a thin cut. Maintaining the vertical growth axis is crucial for us to visualize the annual density banding patterns.

"With CT scanning we are able to work with a complete 3-D reconstruction of the entire core. We can then make digital slices from the core, as many times as we need to in order to continually visualize the annual density bands. CT scanning is the evolution of x-ray."

With CT, adds Cohen, "We have a 3-D visualization of the skeleton from which we can make 'virtual' cuts on the computer that have the exact thickness, orientation and location that we need for a particular coral to get the most precise measurements. X-ray requires that we cut the core 'blind' beforehand, before we know what the orientation of growth is. Whole cores can be sacrificed this way. With CAT scanning, our cores are imaged intact, nothing else is required. This is a huge leap forward over x-ray."

Like MDs diagnosing a sick patient, the researchers scanned six skeletal cores of D. heliopora and were able to pinpoint two high-density growth bands, indicating high thermal stress in 1998 and 2001. This correlates with an abrupt drop in skeletal growth after 1998, which has continued steadily since then.

The corals are building skeleton, or calcifying, at a progressively slower rate because they are losing symbiotic algae that live in the coral tissue. By performing photosynthesis, the algae provide the fuel for the corals to make new skeleton.

But, says Cohen, "when the corals are thermally stressed, they lose algae and many will eventually starve and die. When corals lose enough algae, they actually turn white, and that's what bleaching is. We think these corals are on their way to bleaching."

It was the CT technique that enabled early detection of the problem. "The corals look healthy, but looking inside at the skeleton gives you an idea of things to come," she said. "It's like osteoporosis. You look at a person and, on the outside, everything seems fine, but inside there are signs of trouble.

The same corals had a similar reaction to a "warm event" in 1941-42 but recovered within three years as the ocean cooled. The recovery was possible because that warming episode was probably triggered by El Nino, a natural, short-term climate anomaly.

In contrast, the current warming trendâwhich Cantin says has been going on since 1980--"is due to human-induced climate change," he says, and appears unlikely to be slowed or reversed before coral health deteriorates further. Climate models from the Intergovernmental Panel on Climate Change (IPCC) predict that "summer temperatures in the central Red Sea will continue to rise as atmospheric CO2 concentration rises through the 21st century," the WHOI researchers report in Science.

Co-author Karnauskas concurs that there is little doubt that the Red Sea phenomenon is attributable to long-term climate change. "El Nino events typically last about one year, and in a few rare cases last for two years.," he says. "El Nino--and its 'cold' counterpart, La Nina--are quite well known with a very distinct signature in the Pacific Ocean, where they originate. In the past few decades, there have been several El Nino and La Nina events.

"Therefore, there is no way El Nino could account for a 'trend' that persists for decades. These are simply superimposed upon the human/CO2-induced warming trend. There is probably nobody in the scientific community who would argue the rising temperatures in the Red Sea are related to El Nino. So, in the past few decades, the Red Sea temperature has been going up just like the global mean temperature, and the corals are suffering accordingly."

The IPCC models forecast another 2.5-3-degree C rise in Red Sea temperature by the end of the 21st century. But the authors project that D. heliopora will cease calcifying altogether by 2070, when the models predict that temperatures will reach 1.85 degrees C higher than they are now.

Even that "is probably a conservative estimate," they say. Cohen suggests the end for this species of Red Sea coral may come as early as 2050.

The scientists point out that the results show that, at least in this case, the culprit is sea surface temperatures and not ocean acidification, another effect of CO2 emissions that has become an increasing concern for scientists.

"We were able to pinpoint temperature as the driver of the declining growth rates because we have long records of skeletal growth going back to around 1930," Cohen said, "and we were able to correlate skeletal growth with temperature records that span the same time period. We were also able to rule out ocean acidification because we have actual measurements of the aragonite saturation state of seawater--a measure of acidity--at our study sites.

She cautions against drawing conclusions about other coral species based on these results. "This study reports the impact of rising temperature on one coral species," she says. "It's an important reef-building coral in the Red Sea, but there are about 250 species of stony corals in this region and we have no idea what the other species are doing. Some might be doing much worse; some might be doing a little better in terms of thermal tolerances. We need much more of this type of work to be able to predict what the coral reefs will look like over the next few decades."

These corals, Cantin says, have demonstrated that they are capable of recovering from the transient high-temperature event in the early 1940s. "However" he says, ""this species [in this study] has not [recovered] from the last decade of global warming."

On a long-term scale, he says, "This [CT] technique allows us to assess reef recovery rates without monitoring that reef for 30 years. We can establish an ecological baseline of coral growth for as far back as the corals lived. We can assess this coral colony's physiological performance back through time."

But now, for D. heliopora, the outlook appears bleak. "The data in hand suggest that without immediate, aggressive global intervention to reduce carbon emissions," they conclude in their report, "the pressures of predicted annual heat stress will most certainly result in further deterioration of coral health in the central Red Sea over the next century."

The work was funded by King Abdullah University of Science and Technology.