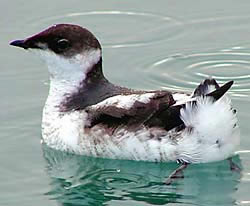 BERKELEY, California -- The effects of overfishing may have driven marbled murrelets, an endangered seabird found along the Pacific coast, to increasingly rely upon less nutritious food sources, according to a new study by biologists at the University of California, Berkeley. A juvenile marbled murrelet. Photo by Rich MacIntosh, USGS

The results, to be published online by early March 2006 in the journal Conservation Biology, suggest that feeding further down the food web may have played a role in low levels of reproduction observed in contemporary murrelet populations, and has likely contributed to the seabirds' listing as an endangered species, the researchers said.

"The dietary patterns of today's marbled murrelets might be artifacts of the profound changes that coastal marine ecosystems world-wide have undergone because of overfishing," said Steve Beissinger, professor of conservation biology in UC Berkeley's Department of Environmental Science, Policy, and Management and principal investigator of the study. "What better place to investigate this process than in Monterey Bay, where sardines once were king and Cannery Row formerly stood?"

The researchers decided to embark on this study when they noticed that the population of 600 marbled murrelets they were studying in central California had very low levels of reproductive success.

"You'd expect birds to nest every year, but we found that in some years, as many as 90 percent of the murrelets we were studying weren't nesting," said Beissinger. "Even in the good years, only 50 percent of the seabirds were nesting, and for those that did, many nests failed for a variety of reasons."

The researchers analyzed marbled murrelet feathers from 136 birds collected in the Monterey Bay region between 1895 and 1911. The historic feathers represent a time period prior to the onset of intensive fishing, decades before the infamous sardine fishery collapse of the late 1940s, and nearly a century before recent declines of anchovies, squid and rockfish.

Measures of stable carbon and nitrogen isotopes - derived from food ingested at the time the birds create feathers and preserved into the feathers - give clues to the birds' diet. More nutritious food items, such as sardines, anchovies and squid, are distinguished in the feathers by higher levels of nitrogen isotopes. Less valuable food sources, including marine invertebrates such as krill, are signaled by greater levels of carbon isotopes.

"It takes about 70 to 80 krill to equal the energy value of one sardine," said Beissinger. "When murrelets have to rely upon less nutritious foods, they need to spend more time diving underwater to catch and eat them, and have less energy to make and lay eggs. The availability of food commonly affects the reproductive success of seabirds."

The researchers were able to determine the time of year that individual feathers were grown. They pointed out that murrelets undergo two molts of feathers each year, one right before the onset of the March through April breeding season, and another after their nesting period ends between August and September. Brown-tipped breast feathers are only lost in the pre-breeding period, while all-white breast feathers and wing feathers are lost in the post-breeding period.

The researchers were thus able to relate the diet of the murrelet to the environmental and fishing conditions at the time the feather was created. "In this paper, we're trying to tease apart climate signals from human fishing impacts," said Ben Becker, the study's lead author. Becker was a UC Berkeley Ph.D. student at the time of the study and is now director and marine ecologist at the Pacific Coast Science and Learning Center at the Point Reyes National Seashore.

The research team found that the proportion of the most nutritious food sources was significantly higher for the murrelets of a century ago in the Monterey Bay region compared with the birds' modern-day counterparts. Compared with the murrelets' historic diets, typical modern pre-breeding diets during cool ocean conditions are composed of 42 percent less high-nutrition prey.

In contrast, prior to breeding during cool ocean years, contemporary murrelets rely more upon krill and mid-level prey, such as sand lance and young rockfish, compared with their historic counterparts.

The researchers found that while ocean temperature was important, the era when the birds lived had a far greater impact on pre-breeding diet. That is, the murrelet diet in the era before the collapse of sardines and declines in other fisheries consisted of a greater proportion of more nutritious foods and fewer lower-value prey items.

Post-breeding diets experienced less change, regardless of ocean temperature or era. The researchers explained that this might be due to the fact that krill and young rockfish are less available in late summer and early fall regardless of fishing pressure or oceanographic conditions.

"If we look back 100 years ago in Monterey Bay, marbled murrelets were almost always feeding on higher trophic level prey, regardless of ocean conditions," said Becker. "Now, even in the same environmental conditions, the murrelets are not able to access higher tropic level prey items."

Becker said this study illustrates an additional factor related to the decline of the marbled murrelet. "For this bird, the primary conservation concerns have been loss of habitat, particularly the coastal old-growth forests where the bird nests," he said. "But it's possible that they're getting a double whammy. Not only are they losing their nesting habitat, they're also experiencing a degraded prey environment."

The researchers pointed out that the U.S. Fish and Wildlife Service has recently decided to start the process to remove the marbled murrelet from the Endangered Species list, denying it protection even though the bird has not recovered throughout its range. The researchers argue that such a move would be premature.

"The threats that have caused marbled murrelets to decline throughout their range have not been remedied," said Beissinger. "Coastal old growth forests will require 50 to 100 years of restoration, and prey resources haven't recovered from the sardine fisheries collapse in the mid-20th century. Other prey items that the murrelets feed upon, including rockfish, have had to have seasonal closures because of heavy harvest for commercial markets. Similarly, the anchovy fishery in central California has declined by 75 percent since 1974."

The study results support the need for fisheries to be managed to address their broader impacts on the ecosystem, the researchers said. "Traditionally, decisions on how much to harvest were made by calculating the impact of fishing on a single species, or by determining how much can be fished in order for the population to rebound in subsequent years," said Becker. "Now, more people are taking an ecosystem approach, considering how harvesting one species will impact other species that rely upon it. However, so little is known about the diet of the murrelet that a study like this is important in informing fishery management decisions."

"Our study also highlights the need to consider locations that improve the production of seabird prey in the ongoing process to determine where to place marine protected areas along the California coast in order to restore marine food webs and conserve seabirds," Beissinger added.

The researchers are conducting additional studies using feathers from a wider range of seabirds and from a greater selection of time periods to get a clearer picture of impacts of oceanic conditions and fishing pressure throughout the past century.

This study was supported by grants from the David and Lucile Packard Foundation, California Division of Agricultural and Natural Resources, UC Berkeley, U.S. Fish and Wildlife Service, California Department of Fish and Game, American Museum of Natural History and Cooper Ornithological Society.