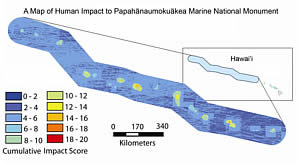 Map of the NW Hawaiian Islands, which stretch over 2,000 km beyond the principal Hawaiian islands, shows how much humans have impacted the reefs

In a recent issue of the journal Coral Reefs, lead authors Kimberly A. Selkoe and Benjamin S. Halpern, both of NCEAS, explain how their maps of the Northwestern Hawaiian Islands (NWHI) –– a vast area stretching over 1,200 miles –– can be used to make informed decisions about protecting the world's fragile reefs.

Coral reef ecosystems are at risk due to the direct and indirect effects of human activities. This study was designed to help natural resource managers make decisions on issues such as surveillance priorities, granting of permits for use, and discernment of which areas to monitor for climate change effects.

"Our maps of cumulative human impact are a powerful tool for synthesizing and visualizing the state of the oceans," said first author Selkoe, who is also affiliated with Hawaii Institute of Marine Biology at the University of Hawaii. "The maps can aid in strategically zoning uses of oceans in an informed way that maximizes commercial and societal benefits while minimizing further cumulative impact."

"President (George W.) Bush declared the Northwestern Hawaiian Islands a National Monument in 2006, in part because it is one of the last places in the oceans that have not been heavily altered by human activities," said Halpern. "Our maps of cumulative human impact on these islands show that, despite their extreme isolation, humans are already significantly impacting this special place, and that many of the key threats, such as those associated with climate change, are not mitigated with Monument designation. We must continue to act to protect these islands and coral atolls if we hope to preserve them for future generations."

Risk of increased rates of coral disease due to warming ocean temperature was found to have the highest impact, along with other climate-related threats. However, the authors noted that climate issues cannot be resolved by managers at the regional level. It was noted that threats related to ship traffic are most easily managed by regional management.

"With the scientific justification provided by our study, the managers of the Monument have an opportunity to make addressing the worst threats a top priority as they decide on management strategies," said Selkoe. "By updating the map of cumulative impacts through time, success of management plans in reducing cumulative impacts can be measured, and permits for new uses can be evaluated in the context of how they add to the landscape of cumulative impacts.

"The coral reefs of the Northwestern Hawaiian Islands make up the majority of U.S. coral reef area, and we should all be proud that they are some of the most pristine in the world, and fully protected under U.S. law," said Selkoe. "However, threats like marine debris, pollution from shipping, climate change effects and alien species still threaten to degrade these reefs. Our effort to systematically inventory and map the ongoing threats to these reefs, as we have done in this project, is an important part of protecting them."

The authors note that this analysis can serve as a case study for other areas and managers who are interested in mapping region-specific cumulative human impacts and in making assessments.