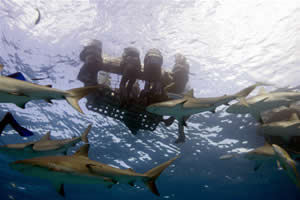 Picture from the 'Ocean of Fear' episode

"Ocean of Fear: The Worst Shark Attack Ever" drew 3.9 million total viewers from 9-11 p.m., according to Nielsen Media Research. That outperformed 2003's "Anatomy of a Shark Bite" (3.2 million).

"Ocean of Fear," narrated by Richard Dreyfuss, tells the story of the crew of the USS Indianapolis, sunk by two torpedoes in the Philippine Sea on the night of July 30, 1945. Nine hundred sailors hit the water, floating helplessly for four days, having to deal with hunger and thirst and menaced by hundreds of sharks. Only 321 came out of the water alive.

"Shark Week" -- featuring more than 130 hours of shark-themed programming -- kicked off its 20th anniversary Sunday and runs through Saturday. Here are some upcoming shows this week:

Perfect Predators: Witness sharks as they live in oceans around the globe, from the migration of a baby shark in Bimini, to the relationships of social lemon sharks and a newly discovered great white behavior. Wednesday, Aug. 1, 9-11 p.m. ET/PT (two-hour special)

Sharks: A Family Affair As South Africa's leading shark expert, Craig Ferreira has spent his entire life studying and diving with sharks. For the past several years his dream has been to travel the world for a year to study what has been called "the dirty dozen" -- 12 of the deadliest species of shark Friday, Aug. 3, 9-10 p.m. ET/PT