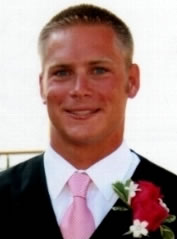 MIAMI, Florida -- A marine biologist that collected fish all over the world is presumed to have drowned during a dive.

Heath Jens Laetari, 28, who lived and worked in Marathon, Fla., disappeared during a dive off the Florida Keys on Sept. 14. A three-day search by the U.S. Coast Guard turned up no sign of his body.

A memorial service will be held Saturday in Wichita.

He married his wife, Summer, in May.

Jane Laetari of Goddard said her son took his first swimming lesson at age 3, then began diving lessons with his parents at age 13. His career plans were formed soon afterward during his first open-water dive, in the Cayman Islands.

Heath Laetari began his studies at Southwestern College in Winfield and completed work on his degree at Nova Southeastern University in Florida. He began working at Dynasty Marine in 2001.

Jane Laetari said her son usually worked as a safety diver on a three-person dive team. When two divers go down to a depth of 300 feet, she said, the safety diver hovers at a depth of 150 feet and is available to help the others if they have trouble.

During the week of his disappearance, Jane Laetari said, her son was having trouble with his contact lenses so he stayed aboard the boat while a co-worker took over the safety diver duties.

At one point during the operation, Jane Laetari said, her son apparently made a "free dive," which involves going only as deep as one can while holding one's breath.

"No one knows exactly what happened," she said.

Since the accident, Jane Laetari said, she has learned how well respected her son was in the business.

"We've gotten hundreds of e-mails from aquariums all over the world," she said. "We knew how many lives he touched, but we never realized until now how people looked up to his abilities, how important he was in the business."