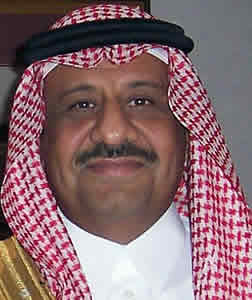 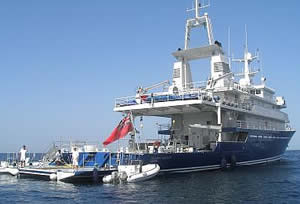 LANDOVER, Maryland -- Having recently observed its 10th anniversary, the Khaled bin Sultan Living Oceans Foundation is preparing for its next scientific research and education project, the Global Reef Expedition, which will launch in 2011 and continue through 2014. The primary scientific goals of the Expedition are to map and characterize coral reef ecosystems, identify their current status and major threats, and examine factors that enhance their capacity to resist, survive and rapidly recover from major disturbance events. The resulting scientific findings will be shared freely with participating countries and scientific and regulatory organizations, and will be used by countries for developing sound management strategies for coral reefs.

"The Foundation's multi-disciplinary network of marine scientists empowered by a state-of-the-art research ship will enable us to conduct relevant scientific surveys in participating countries to give governments a better understanding of their coral reef resources," said Captain Philip G. Renaud, Executive Director of the Living Oceans Foundation. "And, equally important, while we conduct scientific research of coral reef ecosystems during the Global Reef Expedition, we will have an unprecedented opportunity to provide marine science education for the generations who will become the stewards of these valuable yet very vulnerable resources."

During 2011, the Expedition team intends to conduct coral reef surveys in the Bahamas and other countries within the Caribbean region. In 2012, current plans are to conduct research on the coral reefs of French Polynesia, Australia, and other Pacific coral reef regions. The Expedition team also will conduct education programs in all of the participating countries and regions, which will include the involvement of local educators and students on board the ship. Additionally, multi-media technologies will be used to bring the ongoing research into students' classrooms, and coral conservation curricula will be developed for use in schools worldwide during the Expedition.

This fall, the Foundation celebrated its first ten years of scientific and educational accomplishments. In 2000, His Royal Highness Prince Khaled bin Sultan of the Kingdom of Saudi Arabia, the Foundation's founder and chairman, was inspired to establish the Foundation after hosting world-renowned oceanographers aboard his research vessel, the Golden Shadow.

Prince Khaled founded and incorporated the Foundation in the United States to help advance his vision of Science Without BordersÂ®, which is the overarching theme of the Foundation. The Foundation's purposes are to promote and conduct research and education in marine, oceanographic, and other earth sciences as well as to promote public awareness of the need to preserve, protect and restore the world's oceans.

"During the past decade, the Foundation has supported projects to study, survey, and map coral reefs worldwide, and to educate the public about the need for protection and conservation of coral, knowing that healthy reefs are a crucial measure of the vitality of the earth itself," said Prince Khaled. "But what we have done so far is just the beginning. There is much more that must be accomplished to guarantee the integrity of our oceans, and I look forward to partnerships with peoples and organizations throughout the world working to benefit the oceans and our future."

Notable among the Living Ocean Foundation's accomplishments during its first ten years:

The Khaled bin Sultan Living Oceans Foundation is dedicated to the conservation and restoration of living oceans and pledges to champion their preservation through research, education, and a commitment to Science Without BordersÂ®.

Science Without BordersÂ® is the overarching theme of the Khaled bin Sultan Living Oceans Foundation. Its purposes are to provide financial sponsorship of marine conservation programs and scientific research, and to promote public awareness of the need to preserve, protect and restore the world's oceans and aquatic resources.

The Foundation is headquartered just outside of Washington DC in Landover, Maryland. For more information, visit http://www.livingoceansfoundation.org and http://www.globalreefexpedition.org/.