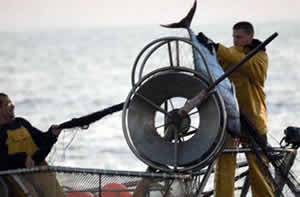 WASHINGTON, D.C. -- Early Monday morning, a group of seven French driftnetters carried out a concerted attack on the Oceana Ranger fishery research vessel. The vessel was on its second week of research recording activities of about 80 French fishing boats using driftnets about 5 to 8 km in length, known as thonailles, to catch tuna and swordfish in the Gulf of LeÃ³n to the north of Corsica.

Thonailles have been banned in the European Union since 2002. In 2005, the French National Council itself repealed the decrees that authorized the use of these driftnets which had been prohibited by EU regulations. Since then, these boats have been operating not only illegally, but also outside of the protection the French authorities granted them in 2003. In addition to overexploiting blue fin tuna and other large pelagic species, these drift nets accidentally capture several hundred cetaceans every year. This fishery even takes place within the Pelagos sanctuary, an international area in French, Italian and Monegasque waters set up for the protection of cetaceans, where yesterday's incidents occurred.

Six marine biologists are sailing on the Oceana Ranger, together with a professional team of photographic reporters. The crew's work routine consists of determining the areas in which driftnetters fish and observing the boats' operations, recording data and taking pictures of the lengths of nets and the catches they take.

This data is then made available to the corresponding authorities in France and other countries, the European Commission and the international bodies responsible for controlling fishing, in order to facilitate illegal fishing (IUU fishing) monitoring. Last year, Oceana carried out a similar campaign, observing the Italian fleet and with the collaboration of the Italian Coastguard.

Oceana is the largest international organization focused solely on protecting the world's oceans. The organization never employs physical confrontation or direct action of any kind in its work approach. The work of the Oceana Ranger is limited to collecting scientific and graphic information and transmitting it to the corresponding administrative and other relevant authorities.

On Monday morning, the Oceana Ranger was encircled by a fleet of thonaillers 25 miles south of Saint Raphael. The fishing boats, which had come from various locations, initiated their attacks by firing a flare at the research vessel from the fishing boat Gallus, and then tried to provoke collisions between the catamaran and the fishing boats, all of which were moving at high speeds in an operation coordinated by the Orchidee II and Santa II. Several of the boats repeatedly threw ropes tied to buoys into the water to entangle them in the propellers of the research vessel's two engines, which were thus forced to halt. Then, the fishing boats surrounded and tied up the Oceana Ranger. The fishermen, some armed with boat hooks and displaying their genitals, threatened to board the catamaran unless the cameras were handed over.

Although they are small and look like traditional fishing boats, these French boats have powerful engines, enabling them to fish in international waters and travel at great speeds, and to cast driftnets five to eight kilometers in length. This activity has been declared illegal by the French National Council itself.

Throughout the attack, which lasted over an hour, the Oceana Ranger's crew stayed calm and did not respond, not even verbally, to these provocations, concentrating instead their efforts on avoiding collisions with the other boats. The French maritime authorities were informed of the situation by radio and sent two helicopters to the area. With the arrival of the helicopters, the driftnetters fled.

Later, Oceana's divers removed the ropes that were entangled in the vessel's propellers and the Ranger continued its journey to the French port of Bastia, in Corsica.

"I am sure that by now the most intelligent thonailler ship-owners will have understood the huge mistake they made in perpetrating this savage attack on a research vessel, which had in no way interfered with their activities and had limited itself to collecting data and taking photos," said Xavier Pastor, coordinator on board the Oceana Ranger. "If anyone still had any doubt about the illegality of the French driftnets, the brutal attempts by the fishermen to try to avoid keeping information about their illegal driftnetting, at all costs, from the general public and the authorities is plain to see".

Pastor also expressed his concern about the conflicting news presented by representatives of the French fishing fleet. Photographs and video footage demonstrating Monday's incidents will soon be delivered to the media and the authorities involved