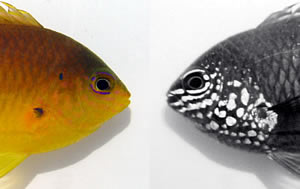 SYDNEY, Australia -- In a remarkable new finding, scientists have reported that certain coral reef fish use ultraviolet (UV) vision to tell the difference between their own and other similar species.

Indeed, the otherwise rather plain-looking Ambon damselfish may even be able to recognize individuals by their faces, in much the same way as humans do, the researchers say in a paper in the latest issue of the journal Current Biology.

The UV vision may act as a secret channel of communication because it is invisible to the fishes' predators, the researchers speculate.

“We observed that certain fish had very distinctive ultraviolet markings on their faces – and we wondered what they were using them for,” says lead author, Dr Ulrike Siebeck of The Vision Centre and The University of Queensland (UQ).

In a series of carefully controlled experiments, the team exposed male Ambon damselfish to males of the same and a different species (with similar overall body coloration but different UV facial patterns) in conditions in which the UV markings could and could not be seen.

They observed that there was only a difference in territorial reaction when the UV facial patterns could be seen, demonstrating that these patterns are necessary for the fish to discriminate between their own and another species.

In further experiments, in which the fish were shown pictures of the different facial markings, the team demonstrated that they were reacting to the specific shape of the u/v patterns on the intruder's face, not simply to their ultraviolet color, she says.

“We came to the conclusion that the fish are using ultraviolet reflecting facial patterns to discriminate between their own species and other, similar-looking fish species. Also that they are reacting to the actual pattern, not simply the u/v light they were seeing.”

However major predatory reef fish like coral trout, wrasse and rock cod do not seem to have the ability to see ultraviolet markings.

“This means the damselfish are effectively exploiting a secret channel of communication among themselves and with other similar, but harmless species – one which cannot be detected by the fish that prey on them.

“This ability to see in the ultraviolet seems to have been retained in some coral reef fishes, whereas carnivorous fish and many higher animals – including humans – seem to have lost it,” Ulrike says.

“It means damselfish can see a wider spectrum of colours than we can, which is remarkable when you consider how colorful coral reefs are naturally. They must find them even more colourful places than we do.”

The team considers that predators like coral trout may have lost the ability to see in the ultraviolet in order to detect contrast more easily, an important factor in detecting prey at greater distances. Also, they are generally longer-lived and may need to avoid u/v damage to their eye cells more than do the shorter-lived damselfish.

Pictures of damselfish facial markings and of the experiment are available at: http://www.vision.edu.au/