Scientists: The Philippines is the World's 'Center of Marine Biodiversity'; Announce Alarm over Marine Threats 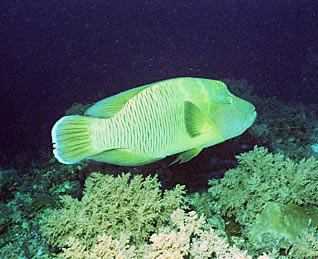 A Napoleon wrasse swimming along the reef edge in Tubbataha. Photo by Yvette Lee

MANILA, The Philippines -- They got caught red-handed with 800 live fish, including 300 of the endangered Mameng (Napoleon Wrasse), but 30 Chinese poachers apprehended on December 21 by rangers at the Tubbataha protected marine park may yet get to walk if the Chinese government has its way.

Chinese diplomats have reportedly demanded the release of the crew, according to sources at the Department of Foreign Affairs. The Chinese, the sources said, even want the Navy to escort the 300-gross ton Ho Wan out of the area.

Yet the case is fast shaping up as more than just a simple poaching incident.

For one, rangers are irked by the slow response of the Philippine Navy to their request for an escort. The Department of Foreign Affairs (DFA) has also apparently shown partiality for the poachers.

The crew, apprehended barely 1.5-kilometer away from the ranger station, also claimed to have permits from the Maritime Authority and the Bureau of Customs, although the Ho Wan carries a Chinese flag and an all-Chinese crew.

A man by the name of Nixon Edora, operations manager of South Pacific Inter-marketing Corp., has contacted the Tubbataha Management Office, claiming his company alleges the vessel and has the required Bureau of Fisheries and Aquatic Resources (BFAR) permits.

Angelique Songco, Tubbataha Management Office head, said a review of documents showed the crew did not have any permit.

She said rangers spotted the Ho Wan entering the protected Tubbataha zone about 2:30 on December 21. They approached the vessel to warn that it had encroached on a protected area and became suspicious when it sped off. After a chase of 20 to 30 minutes and the firing of warning shots, they cornered the vessel and escorted it to the ranger station's mooring bureau.

Rangers found 11 sampans, built in tanks with fishes and many compressor equipment.

The fish workers claimed the caught the fish in Tawi-Tawi, where they got the BFAR permit.

BFAR director Malcolm Sarmento said this was not possible, as the agency has no person in the Tawi-Tawi area to authorize fishing.

Sarmento also stressed that no government agency could issue a permit to fish the Mameng as this was on the list of protected species.

Tan and Songco said the Tubbataha Park office immediately sought the assistance of the Philippine Navy and Wescom (Western Command) to tow the vessel to Puerto Princesa for confiscation of the illegal cargo, and processing for arraignment of the crew.

The Wescom, headed by Vice Admiral Danga, ignored the request, saying none of several Navy vessels in Palawan were available.

"For three days now, the Western Command and the Philippine Navy have taken no positive action," Songco said in a report faxed to Ezzedin Tago, DFA special assistant, and furnished The Times.

Commander Jody Bacardo, information chief of the Philippine Navy, told The Times in a telephone interview that Navy personnel form part of the Tubbataha ranger station.

He confirmed a request for a Navy ship to tow the Ho Wan to Puerto Princesa but said their lone vessel in the area was on a security mission in Western Palawan.

Bacardo said he expects the Navy vessel to arrive in Tubbataha on the 26th or 27th of the month.

The Chinese government apparently had better resources because a consul had reportedly seen. An officer from the Chinese Embassy suddenly arrived in Puerto Princesa within 24 hours of the report.

An official of the DFA also reportedly called Puerto Princesa to defend the Chinese, calling the arrest irregular as the vessel was merely passing through Philippine waters.

Songco said if the Navy still fails to send an escort, they are considering having some of the rangers themselves board the vessel and instruct the Chinese captain to sail for Puerto Princesa.

Rep. Tony Alvarez, under whose district covers the Tubbataha marine park, has been trying to facilitate the delivery of fuel for one of the Navy boats presently in Puerto Princesa.

When asked if it was true that the DFA was in favor of releasing the boat due to diplomatic ties, he replied "the DFA should use precisely those 'ties' to impress on these foreign nationals that we take the protection of our environment seriously here in Palawan, and that we will prosecute to the fullest extent of the law those who violate them."

Tan said that did not lessen the gravity of the crime. The Mameng is listed under Appendix 2 of the Convention for the International Trade of Endangered Species (CITES), Tan noted in an e-mail message.

"The Philippines has made international commitments to abide by CITES rules. In other words, mere possession of this type of fish, without proper official permits from the Bureau of Fisheries and Aquatic Resources, is a crime," he said.

Customs officials also told The Times that mere possession of the Mameng carries a fine of P120,000 and a prison term between 12 and 20 years.

The Chinese vessel reportedly carried only Marina papers, showing that it entered Philippine waters via Bonggao, in Tawi Tawi. There is no BFAR officer in Bonggao that is authorized to give permission for harvesting live Napoleon wrasse, said Malcolm Sarmento, BFAR director. It is not cultivated for legal live sale anywhere in the country, he stressed.

Sarmento on Sunday told The Times he had ordered a BFAR boat to get the seized fish but ran into fuel problems.

He told The Times in a text message the Mameng had been ordered freed back into the sea after photographic evidence have been taken by the rangers.

The Tubbataha Reefs is the only Unesco World Heritage Site in Asia that is marine in nature. It is known as the top dive destination in the Philippines and hundreds of divers visit the park every year, paying heavy access fees that are used to patrol the park boundaries.

President Arroyo, a certified diver who has visited the park, through an Executive Order just signed a few months ago, extended the parks boundaries, originally at 33,2000 hectares to over 99,000 hectares.

The area is described by marine scientists as a spawning and grow-out sanctuary for corals and fishes whose eggs are carried by oceanic currents to replenish over fished coastal reefs, not only in Palawan and the Visayan islands, but as far south as Malaysia and Indonesia.