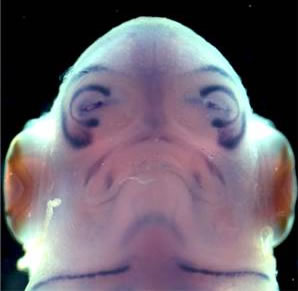 The dark markings indicate gene expression in the electrosensory organs in the head of an shark.

GAINSVILLE, Florida -- Sharks are known for their almost uncanny ability to detect electrical signals while hunting and navigating.

Now researchers have traced the origin of those electrosensory powers to the same type of embryonic cells that gives rise to many head and facial features in humans.

The discovery, reported by University of Florida scientists in the current edition of Evolution & Development, identifies neural crest cells, which are common in vertebrate development, as a source of sharks' electrical ESP.

It also fortifies the idea that before our early ancestors emerged from the sea, they too had the ability to detect electric fields.

"Sharks have a network of electrosensory cells that allows them to hunt by detecting electrical signals generated by prey," said Martin Cohn, a developmental biologist with the departments of zoology and anatomy and cell biology, and the UF Genetics Institute. "That doesn't mean they can only detect electric fish. They can sense electricity generated by a muscle twitch, even if it's the weak signal of a flounder buried under sand."

Likewise, sharks are widely thought to use the Earth's magnetic field for navigation, enabling them to swim in precise paths across large expanses of featureless ocean, Cohn said.

"If you think of this in the big picture of evolution of sensory systems, such as olfaction, hearing, vision and touch, this shows sharks took a pre-existing genetic program and used it to build yet another type of sensory system," Cohn said.

UF and University of Louisiana researchers analyzed electroreceptor development in the embryos of the lesser spotted catshark, an animal that is largely motionless during the day and hunts at night, mainly in the seagrass beds of the eastern Atlantic Ocean.

Using molecular tests, scientists found two independent genetic markers of neural crest cells in the animal's electricity-sensing organs. Analysis shows these cells migrate from the brain and travel into the developing shark's head, creating the framework for the electrosensory system - a previously unknown function of a much-studied group of cells, according to Renata Freitas, a doctoral candidate in UF's zoology department and first author of the paper.

The process mirrors the development of the lateral line that allows fish to mechanically sense their environment, and organs of the inner ear that enable people to keep their balance. But scientists suspect as human ancestors emerged from the sea, they discarded their lateral lines as well as their ability to sense electrical fields.

"Our fishy ancestors had the anatomy for it," said James Albert, a former UF biologist who is now at the University of Louisiana. "You can imagine how valuable this system would be if you were aquatic, because water is so conductive. But it doesn't work on land - air doesn't conduct electricity as well. When it happens, it's called a lightning bolt and you don't need special receptors to sense it."

All primitive animals with backbones could sense electricity, according to Michael Coates, an associate professor of organismal biology and anatomy at the University of Chicago. Mammals, reptiles and birds lost the sense over time, as did most fish alive today.

But in sharks and a few other species, such as sturgeons and lampreys, electrosensory capability endured.

"Most fish you see today have large eyes," Coates said. "But sharks are predators that do not particularly rely on vision. If you see a hammerhead shark searching for flatfish, it moves its head back and forth, almost as if it were using a metal detector. Knowing that the electrosensory system may have developed with involvement of neural crest cells is valuable for people trying to reconstruct vertebrate evolution. It gives us further indication of how all of the various sensory systems come on line."

But the idea that the neural crest truly is the source of the electrosensory system will raise eyebrows, scientists say.

"It's a very interesting paper for two reasons," said Glenn Northcutt, a distinguished professor of neuroscience at the University of California, San Diego, and a leading expert in vertebrate neurobiology. "For the first time, someone has shown which molecules may be responsible for guiding the development of the receptors of the lateral line system. I think this will hold true and is a very important finding. But I'm skeptical about the claim the neural crest gives rise to electroreceptors. It still requires a definitive experiment, where the developing neural crest cells are marked with dye, the embryo develops and the dye clearly shows up in the electroreceptors."

Dye tests are a classical way of mapping cell movements during development, and have been used to explore the origins of limbs and brain cells. In the current research, scientists used genetic markers to trace neural crest cells.