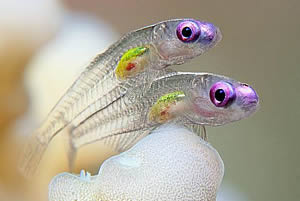 MIAMI, Florida -- Tobias Friedrich of Germany has been named the Overall Winner of the 2011 Annual Underwater Photography Contest hosted by the University of Miami (UM) Rosenstiel School of Marine & Atmospheric Science. The winning photograph was submitted under the Macro category and depicted two extremely small Goby fish, no bigger than an inch, spotted on a dive near Marsa Alam, Egypt.

"I spotted the first Goby and set up my camera for a close angle. Slowly I was approaching the small fish so that it could fill out the picture a bit more. When I was ready for the shot, surprisingly a second Goby came out of nowhere and placed itself on top of the first one. I immediately took 2â3 shots before the second Goby disappeared. Right after, I quickly checked the images on the back of my camera for exposure and sharpness and was happy that I captured this special moment which only took 1â2 seconds," says Friedrich.

Other winners listed by category, include:

The underwater photography contest is held annually, and is open to all amateur photographers who earn no more than 20 percent of their income from their photography. The winning prize is a trip on Blackbeard's Cruises departing from Freeport, Bahamas. View all the winning photographs here.

The winner was announced at a reception on April 20, following the Sea Secrets lecture series featuring UM Associate Professor and Director of the Leonard and Jayne Abess Center for Ecosystem Science and Policy, and National Geographic Emerging Explorer, Kenny Broad.