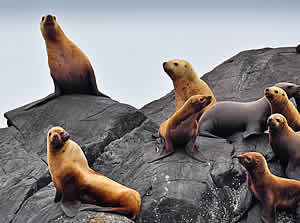 VANCOUVER, Canada -- Parasites and pathogens infecting humans, pets and farm animals are increasingly being detected in marine mammals such as sea otters, porpoises, harbor seals and killer whales along the Pacific coast of the U.S. and Canada, and better surveillance is required to monitor public health implications, according to a panel of scientific experts from Canada and the United States.

UBC scientists Stephen Raverty, Michael Grigg and Andrew Trites and Melissa Miller from the California Department of Fish and Game, presented their research today at the Annual Meeting of the American Association for the Advancement of Science (AAAS) in Vancouver, Canada.

Between 1998 and 2010, nearly 5,000 marine mammal carcasses were recovered and necropsied along the British Columbia and Pacific Northwest region of the U.S., including whales, dolphins and porpoises, sea lions and otters.

"Infectious diseases accounted for up to 40 per cent of mortalities of these marine animals," says Stephen Raverty, a veterinary pathologist with the Animal Health Centre in the British Columbia Ministry of Agriculture and Lands, and an adjunct professor in UBC's Marine Mammal Research Unit.

"In many cases, the diseases found in these marine mammals have similar or genetically identical agents as those infecting pets and livestock. We don't yet know how these diseases are affecting the health of marine mammals" says Raverty.

For example, researchers recently identified the first case of Neospora caninum in sea otters. The parasite is known to cause infectious abortions in dairy cattle and muscular and bone diseases in dogs. Cryptococcus gatti, a fungus typically associated with dead and decomposing eucalyptus trees in tropical regions, has been found in some harbor and Dall's porpoises.

"The marine mammals that died of severe brain disease were infected with two common parasites, Toxoplasma and Sarcocystis, which are shed in the feces of feline and opossum hosts," says Michael Grigg, a researcher with the U.S. National Institutes of Health's Laboratory of Parasitic Diseases and adjunct professor in UBC's Marine Mammal Research Unit. "Expansion of host range for the opossum and climate change may be important factors contributing to the increased incidence of infection from these land-based pathogens "

"We can expect increased health risks for humans, pets and marine mammals sharing the same polluted marine habitat â including along the shorelines right here in downtown Vancouver," says Andrew Trites, director of UBC's Marine Mammal Research Unit. "In a way, marine mammals are the canary in the coal mine â we must consider ourselves warned and take appropriate action.

"Marine mammals recognize no borders, and neither do pathogens and parasites," says Raverty.