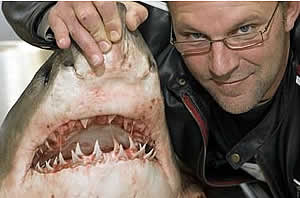 Dr Wroe with the shark

Scientists are using sophisticated computer software to determine the "bite force" of a great white shark (Carcharodon carcharias) netted near the coast of Sydney.

The research will reveal unprecedented information about the creature's feeding habits by analyzing new anatomical and biomechanical data from the shark's skull, jaws, and muscles and soft tissues.

The 2.5 meter specimen was recently imaged inside a computer tomography (CT) scanner that generated three-dimensional pictures of the shark's internal anatomy.

Using novel imaging and analysis software techniques developed by the research team from UNSW and the University of Newcastle, scientists have simplified the scan of the shark's skull, jaw and muscles into hundreds of thousands of tiny discrete, connected "finite elements".

Shaped like tiny three-dimensional triangular prisms (tetrahedrons) these elements contain a host of coded data about the properties of the shark's anatomy and tissue never before captured or analyzed by scientists.

Using a technique called "finite element analysis" the researchers will be able effectively "crash test" the shark's skull and jaws under different scenarios inside a computer. This will reveal in new detail the complex set of structural and mechanical stresses and strains on the shark's skull anatomy and muscles.

By examining how the great white shark's digital skull holds up under various conditions, the team can determine what sort of forces and behaviors it's best adapted to handle, and examine competing hypotheses about its feeding behavior.

"The new information will allow us to predict the strength of the shark's bite and relationships between its skull architecture and its feeding behavior," he says.

"Until now all that's known about cranial mechanics among sharks has come from relatively unsophisticated experiments. Although bite force has been measured in some living great whites, there is no way of knowing whether the bites these individuals have produced are anywhere near the maximums that they are capable of. Most suspect that they are not.

"Our methods allow us to generate accurate maximum bite-force estimates, but this approach has many other advantages over more conventional methods. For example, these computer simulations give us very detailed three-dimensional information on the distribution of stress and strain in the jaws and cranium.

"So, we can digitally 'crash-test' specimens under different simulations of behavior and determine just what the animal is best adapted to do - and of course - what it is not well-adapted to do. Consequently, we can define theoretical limits on behavior. Another major advantage is that we don't need to damage valuable specimens to get this data."

Wroe and colleagues also want to use this model to estimate bite force in the great white's even more terrifying extinct cousin, the gigantic Carcharodon megalodon. This awesome fish grew to around 16 meters and, at around 30 tonnes, was at least 15 times as heavy as the largest living great whites.

The new techniques developed by Dr Wroe and his colleagues, Col McHenry, Phil Cluasen (University of Newcastle) and Karen Moreno (UNSW), mean they will be able to compare the bite force of the great white with a host of living and extinct carnivores, establishing a broader comparative"league-table" of the most powerful biting hyper-carnivores known to science.

Presently, the extinct marsupial lion, one the greatest carnivores to roam Australia, holds number one position as the most powerful biter for its size among mammals - living or extinct. The largest of eight species of pouched lions that stalked Australia 30,000 years ago, Dr Wroe calls the creature a "frightening beast with teeth like bolt cutters."

University of South Florida shark biologist Dr Dan Huber is working with the Australian research team to learn whether sharks such as the great white are responsible for damaging submarine cables and communication systems on US Navy submarines.

Dr Huber will perform a dissection on the shark in Sydney this week. He works closely with the US Navy, providing advice about marine life that bite and damage submarine cables and towed acoustic arrays that Navy vessels rely on for acoustic surveillance and communication.

He has done bite force and scanning electron microscope analysis studies of tooth patterns left on damaged cables and accumulated a library of likely candidate predators.

Dr Huber's team has experimented with protective materials including Kevlar fibers as a means of protecting cables and arrays from attacks from marine life. See here.

The bite force analysis and tooth signature data taken from the great white specimen will add to scientific understanding of how to protect both navy and civilian communication systems.