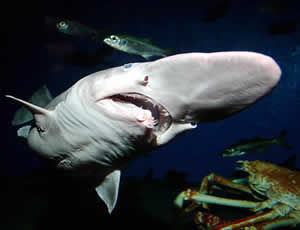 The goblin shark -- a rarely seen species often called a "living fossil" -- was caught alive in Tokyo Bay but died after being put on display.

TOKYO, Japan -- A goblin shark -- a rarely seen species often called a "living fossil" -- was caught alive in Tokyo Bay but died after being put on display, an aquarium said.

The grey, long-nosed shark was caught in fishermen's nets around 150 to 200 metres (500 to 650 feet) deep. It was discovered by officials of the Tokyo Sea Life Park when they took a boat with local fishermen on January 25.

"We were able to bring it to the aquarium alive and show it to the public," said an official at the park.

But the shark died on the morning of January 27.

"Dead goblin sharks are caught from time to time, but it is rarely seen alive. We were able to document the way the shark swims. After it died, we dissected the specimen for further studies," he said.

The shark was about 1.3 metres long.