Shark Pups Born In Bizarre Caesarean Released Back Into Wild; 'They Have Grown Strong And Healthy'

Sea Turtle 'Vicki Lee' Out Of Rehab, Released Back To Gulf Of Mexico With Satellite Tag 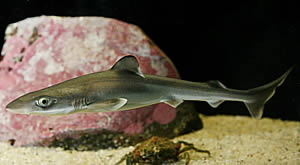 AUCKLAND, New Zealand -- Eight baby School shark pups born in a bizarre caesarean section at Kelly Tarlton’s last year are being released back into the wild this week.

The pups made international headlines last November when they were born, premature but healthy, from a gash their mother sustained when she was bitten by a much larger Broadnose Sevengill shark.

Kelly Tarlton’s Antarctic Encounter and Underwater World Curator Andrew Christie says the now four-month-old pups weigh 415 grams and measure 45 cm each on average and are strong enough to have every chance of survival in the wild.

The Waitemata Harbour has been chosen for the pups release because this is where they would have likely been born if their mother hadn’t come to Kelly Tarlton’s. Mr Christie says the sharks – even once fully grown – will be no danger to the scores of Aucklanders who enjoy the harbor and surrounding beaches.

“Every year thousands of shark pups just like these guys are born in the waters around Auckland. Despite their fearsome reputation, sharks represent a very low risk to humans and in fact there hasn't been a single recorded School shark attack.”

In November 2009 Kelly Tarlton’s staff were alerted to the strange birth by visitors and rushed to rescue the pups, removing the premature sharks from the predator tank and quarantining them behind the scenes where curatorial staff could keep a watchful eye on their condition and progress.

Sharks don't have maternal instincts and just birth or ‘drop’ their babies and swim off – leaving the pups to fend for themselves. Because of this, shark pups are born with the skills they need to develop to survive. This means that the Kelly Tarlton’s pups won't be at a disadvantage to their wild born cousins when they are released.

“If anything our eight School shark pups will have a better chance of survivability when they are released. Born prematurely in the wild their chances of seeing adulthood would have been very small, but now – because they have grown strong and healthy during the past four months – these pups have a better than average chance of making it.”

Despite emergency medical treatment and ongoing monitoring and care, the pup’s mother eventually succumbed to her injuries. Mr Christie says seasonal aggressive behavior between sharks in the wild is commonplace.

The release of the School shark pups is scheduled to coincide with Sea Week (March 7-14). Mr Christie says Sea Week is a great opportunity for New Zealanders to take a closer look at the oceans and the creatures who inhabit them. He says he hopes the release of the sharks helps put the spotlight on these fascinating creatures, clearing up misconceptions and impressing on people the need to keep the species safe for future generations.

As apex predators, sharks play a vital role maintaining the continued health of our oceans and the other creatures within them. Sharks ensure the genetic fitness of other species by removing the sick and weak and keeping population sizes in check. If shark populations were to decline significantly then we would be likely to see dramatic chain reactions including rises and falls in other populations that could throw the oceans' ecosystems into disarray.

School sharks are listed as “Vulnerable” within the subcategory of “Threatened” on the IUCN Red List of Threatened Species. Worldwide, humans kill 100 million sharks every year – that's about three a second! With their low birth rates, slow growth and late maturity many sharks are now in danger of being wiped out and some experts have predicted that our grandchildren may never have the opportunity to see one.

Mr Christie says sharks have developed a fearsome reputation but that, even when talking about more aggressive sharks, we need to keep the risk in perspective. There have been no fatal shark attacks in New Zealand since 1974 and every year more people die from bees, toasters and Christmas lights than from shark attacks. In fact, Mr Christie says statistically you are 99 times more likely to be struck by lightening twice than to be attacked by a shark.