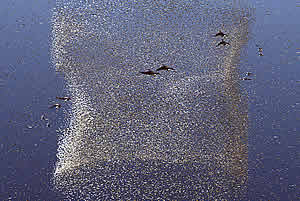 CORVALLIS, Oregon -- A new study has found that each step of the marine food chain is clearly controlled by the trophic level below it â and the driving factor influencing that relationship is not the abundance of prey, but how that prey is distributed.

The importance of the spatial pattern of resources â sometimes called "patchiness" â is gaining new appreciation from ecologists, who are finding the overall abundance of food less important than its density and ease of access to it.

Results of the study are being published this week in the Royal Society journal Biology Letters.

Kelly Benoit-Bird, an Oregon State University oceanographer and lead author on the study, said patchiness is not a new concept, but one that has gained acceptance as sophisticated technologies have evolved to track relationships among marine species.

"The spatial patterns of the resource ultimately determine how the ecosystem functions," said Benoit-Bird, who received a prestigious MacArthur Fellowship in 2010. "In the past, ecologists primarily used biomass as the determining factor for understanding the food chain, and the story was always rather muddled. We used to think that the size and abundance of prey was what mattered most.

"But patchiness is not only ubiquitous in marine systems, it ultimately dictates the behavior of many animals and their relationships to the environment," she added.

Benoit-Bird specializes in the relationship of different species in marine ecosystems. In one study in the Bering Sea, she and her colleagues were estimating the abundance of krill, an important food resource for many species. Closer examination through the use of acoustics, however, found that the distribution of krill was not at all uniform â which the researchers say explained why two colonies of fur seals and seabirds were faring poorly, but a third was healthy.

"The amount of food near the third colony was not abundant," she said, "but what was there was sufficiently dense â and at the right depth â that made it more accessible for predation than the krill near the other two colonies."

The ability to use acoustics to track animal behavior underwater is opening new avenues to researchers. During their study in the Bering Sea, Benoit-Bird and her colleagues discovered that they could also use sonar to plot the dives of thick-billed murres, which would plunge up to 200 meters below the surface in search of the krill.

Although the krill were spread throughout the water column, the murres ended up focusing on areas where the patches of krill were the densest.

"The murres are amazingly good at diving right down to the best patches," Benoit-Bird pointed out. "We don't know just how they are able to identify them, but 10 years ago, we wouldn't have known that they had that ability. Now we can use high-frequency sound waves to look at krill, different frequencies to look at murres, and still others to look at squid, dolphins and other animals.

"And everywhere we've looked the same pattern occurs," she added. "It is the distribution of food, not the biomass, which is important."

An associate professor in the College of Earth, Ocean, and Atmospheric Sciences at Oregon State University, Benoit-Bird has received young investigator or early career awards from the Office of Naval Research, the White House and the American Geophysical Union. She also has received honors from the Acoustical Society of America, which has used her as a model scientist in publications aimed at middle school students.

Her work has taken her around the world, including Hawaii where she has used acoustics to study the sophisticated feeding behavior of spinner dolphins. Those studies, she says, helped lead to new revelations about the importance of patchiness.

Ocean physics in the region results in long, thin layers of phytoplankton that may stretch for miles, but are only a few inches thick and a few meters below the surface. Benoit-Bird and her colleagues discovered a layer of zooplankton â tiny animals that feed on the plankton â treading water a meter below to be near the food source. Next up in the food chain were micronekton, larger pelagic fish and crustaceans that would spend the day 600 to 1,000 meters beneath the surface, then come up to the continental shelf at night to target the zooplankton. And the spinner dolphins would emerge at night, where they could reach the depth of the micronekton.

"The phytoplankton were responding to ocean physics," Benoit-Bird said, "but all of the others in the food chain were targeting their prey by focusing on the densest patches. We got to the point where we could predict with 70 percent accuracy where the dolphins would show up based just on the phytoplankton density â without even considering the zooplankton and micronekton distribution."

Ocean "patchiness" is not a new concept, Benoit-Bird says, but may have been under-appreciated in importance.

"If you're a murre that is diving a hundred meters below the surface to find food, you want to maximize the payoff for all of the energy you're expending," Benoit-Bird said. "Now we need more research to determine how different species are able to determine where the best patches are."