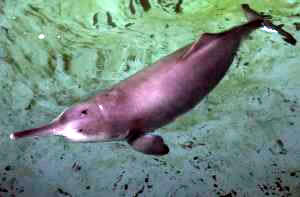 BEIJING, China -- The reported sighting of a Yangtze River dolphin, or Baiji, means there is still a chance for people to take further action and protect the cetaceans in the Yangtze from extinction, according to World Wildlife Fund.

The Chinese media reported that a local businessman in Tongling City in east China’s Anhui Province filmed “a big white animal” with his digital camera on August 19. The footage was later confirmed to be the Baiji by Prof. Wang Ding, a leading scientist in Baiji study at the Institute of Hydrobiology of the Chinese Academy of Sciences.

It is the first Baiji reportedly found in the Yangtze since the scientific expedition last year, during which no single Baiji was spotted.

Based on the river’s geographic and hydrological complexity and the official definition of extinction by IUCN, WWF and many scientists agreed that this species was “functionally extinct”, but thought it was still too early to declare its extinction.

“This sighting presents a last hope that the Baiji may not go the way of the dodo bird,” said Karen Baragona, Yangtze River Basin Program leader at World Wildlife Fund. “Other species have been brought back from the brink of extinction like the southern right whale and white rhinos, but only through the most intensive conservation efforts.”

WWF has been actively involved in the protection of cetaceans and their habitat in the Yangtze River. “WWF calls for immediate joint efforts to provide a living space for this beautiful animal, which is a key species indicating the health of its habitat – the Yangtze River. To be effective, efforts must address agriculture, water resources, transportation, environmental protection and sanitation to reduce human disturbance and protect the cetaceans in the river,” Baragona said.

Last year, WWF cooperated with other stakeholders to finish drafting a protection strategy and action plan to improve the protection capacity of nature reserves.

“Protections will be implemented under the WWF program to conserve the Baiji and the Yangtze together with related stakeholders,” Baragona added.