Experts: German U-864 Submarine Should Be Entombed to Contain Mercury Cargo

Study Examines Why Mercury Is More Dangerous In Oceans; 'The Exposure Rate Of Mercury In The U.S. Is Quite High'

Odyssey Announces Second Silver Cargo Shipwreck Discovery For 2011; 'This Was A Contingency Project' 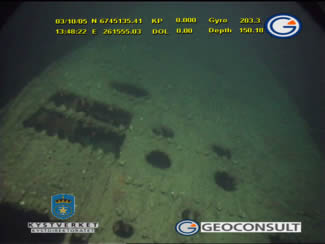 OSLO, Norway -- Based on field studies performed during the past three years, the Norwegian Coastal Administration recommends encasing the wreckage of U-864 and covering the sediments surrounding the wreck. Such an encasement would prevent the mercury in the wreck from leaking into the marine environment.

World-wide, about 30 large-scale encasing and coverage operations of mercury contaminated debris have been performed in the past 20 years. Extensive documentation shows that these measures have been effective. Encasing and covering the wreck are regarded as permanent environmental protection measures. The Norwegian Coastal Administration recommends covering the wreckage with a special type of sand as an absorption layer, and reinforcing the upper layer to prevent erosion.

The Norwegian Coastal Administration does not recommend raising the wreck of the U-864 due to a high operational risk and the considerable risk of further dispersal of the pollutant.

The German submarine U-864 was sunk on 9 February 1945, on its way from Germany via Norway to Japan with a cargo of war material. According to historical documents, the submarine was carrying about 65 tonnes of metallic (liquid) mercury, stored in steel containers. The wreck of the U-864 was found by the Royal Norwegian Navy in March 2003. It lies at a depth of approx. 150 metres, about 2 nautical miles west of Fedje.