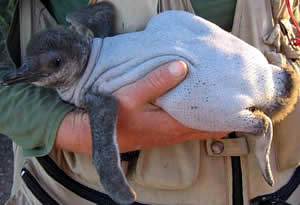 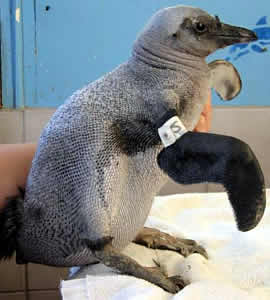 Feather-loss disorder has also been observed in African penguins, which inhabit the coast and offshore islands of South Africa. Credit: Nola Parsons

BRONX, New York -- Researchers from the Wildlife Conservation Society, the University of Washington, and other groups are grappling with a wildlife mystery: Why are some penguin chicks losing their feathers?

The appearance of "naked" penguinsâafflicted with what is known as feather-loss disorderâin penguin colonies on both sides of the South Atlantic in recent years has scientists puzzled as to what could be causing the condition.

A study on the disorder appears in a recent edition of the journal Waterbirds. The authors of the paper are: Olivia J. Kane, Jeffrey R. Smith, and P. Dee Boersma of the Wildlife Conservation Society and the University of Washington; Nola J. Parsons and Vanessa Strauss of the South African Foundation for the Conservation of Coastal Birds; and Pablo Garcia-Borboroglu and Cecilia Villanueva of Centro Nacional PatagÃ³nico.

"Feather-loss disorders are uncommon in most bird species, and we need to conduct further study to determine the cause of the disorder and if this is in fact spreading to other penguin species," said Boersma, who has conducted studies on Magellanic penguins for more than three decades.

The feather-loss disorder first emerged in Cape Town, South Africa in 2006, when researchers for the South African Foundation for the Conservation of Coastal Birds (SANCCOB) first observed the disorder in African (or black-footed) penguins in a rehabilitation center. During that year, approximately 59 percent of the penguin chicks at the facility lost their feathers, followed by 97 percent of the chicks at the facility in 2007, and 20 percent of the chicks in 2008. Chicks with feather-loss disorder, it was discovered, took longer to grow to a size deemed suitable for release into the wild. The chicks eventually began growing new feathers.

One the other side of the South Atlantic, researchers from WCS and the University of Washington observed feather-loss disorder in the chicks of wild Magellanic penguins (closely related to African penguins) for the first time in 2007 in four different study sites along Argentina's coastline. Researchers also noted that while feathered chicks sought out shade in the hot midday sun, featherless chicks remained in the sun's glare. Several of the chicks with feather-loss disorder died during the study.

In both instances, penguin chicks with feather-loss disorder grew more slowly than feathered chicks. Featherless chicks were also smaller in size and weight than feathered chicks; both disparities were due to the increased energy spent in thermoregulation in the absence of an insulating coat of feathers and/or down. So far, the possible causes include pathogens, thyroid disorders, nutrient imbalances, or genetics.

"The recent emergence of feather-loss disorder in wild bird populations suggests that the disorder is something new," said Mariana Varese, Acting Director of WCS's Latin America and Caribbean Program. "More study of this malady can help identify the root cause, which in turn will help illuminate possible solutions."

"We need to learn how to stop the spread of feather-loss disorder, as penguins already have problems with oil pollution and climate variation," said Boersma. "It's important to keep disease from being added to the list of threats they face."