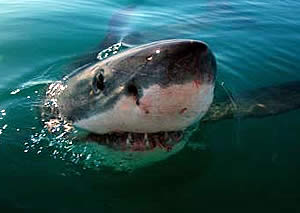 A new study shows part of the great white shark genome is more similar to humans than zebrafish. credit M. Scholl, Save Our Seas Foundation

The great white shark, a major apex predator made famous by the movie "Jaws," is one of the world's most iconic species capturing an extraordinary amount of public fascination. An intriguing question is what makes a white shark so distinctive? One way to address this is to explore the genetic makeup of this remarkable animal.

A new study by scientists from Nova Southeastern University's (NSU) Save Our Seas Shark Research Centre and Cornell University published in final form today in the journal BMC Genomics now undertakes the first large-scale exploration of the great white shark's genetic repertoire, and comes up with unexpected findings.

The researchers compared the transcriptome (i.e., the set of RNA sequences expressed by the organism's genes) from the white shark heart to the transcriptomes from the best studied fish research model (the zebrafish) and humans to look for similarities and significant differences that might explain the distinctiveness of the white shark. So they had a common comparative base, the researchers compared gene products that had known functions in all three species.

Surprisingly, the researchers found that the proportion of white shark gene products associated with metabolism had fewer differences from humans than zebrafish (a bony fish).

Indeed, more broadly speaking, the researchers were also surprised to find that other aspects of the white shark heart transcriptome, including molecular functions as well as the cellular locations of these functions, also showed greater similarity to human than zebrafish. Like many first looks at complex scientific questions, the unexpected results of this study raises more questions than provides answers.

"It's intriguing why there are these fewer differences in the proportion of gene products between white sharks and humans, than white sharks and zebrafish" said study co-author Mahmood Shivji, director of NSU's Save Our Seas Shark Research Center and Guy Harvey Research Institute. "One possibility for the apparent greater similarity between white sharks and humans in the proportion of gene products associated with metabolism might be due partly to the fact that the white shark has a higher metabolism because it is not a true cold-bodied fish like bony fishes; however this explanation remains a hypothesis to be further tested."

One of the notable biological properties of white sharks is that it is one of few fishes that is regionally warm-bodied, i.e., parts of its body (its viscera, locomotor muscles and cranium) are kept at a higher temperature than the surrounding water world - a property known as regional endothermy. This warm-body property is in turn associated with elevated metabolic rates compared to true cold-blooded bony fishes.

"Additional comparative data from other white shark tissues and/or from other endothermic shark species such as makos would be required to see if this general similarity in gene products holds", said Michael Stanhope of Cornell, who co-led the study with Shivji. "Nevertheless, this preliminary finding opens the possibility that some aspects of white shark metabolism, as well as other aspects of its overall biochemistry, might be more similar to that of a mammal than to that of a bony fish."

Another curious feature of the genetic repertoire of the white shark heart was that the transcriptome revealed a much lower abundance of a certain type of DNA sequence that occurs in repeated triplet form, than found in other vertebrates. Interestingly, in human genes that contain such repeated triplet sequences, an aberrant increase in their number has been linked to a variety of neurological disorders. It's not known whether sharks are immune to neurological genetic diseases, but the fact that these DNA patterns occur in such low abundance in white shark genes may indicate a reduced chance of similar such disorders in this primitive vertebrate.

"Our results, along with other distinctive shark genome features reported by the very few studies in this area by others, are suggesting that we may be in for some surprises as we further explore sharks at their most fundamental level – their genes" said Shivji. "We've just scratched the surface in terms of investigating what makes these evolutionary marvels, and in many cases threatened species, tick."