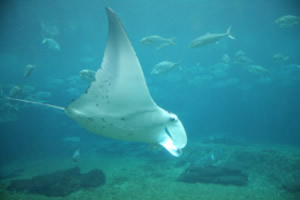 ATLANTA, Georgia -- The Georgia Aquarium announced today the addition of a manta ray to the 6.3 million gallon Ocean Voyager gallery, built by The Home Depot. The addition of the female manta ray, Nandi, makes Georgia Aquarium the only aquarium in the United States to ever house a manta ray and one of only four aquariums in the world to display this species. Nandi will join four whale sharks and thousands of other animals in the world’s largest aquarium exhibit.

Nandi, who measures more than nine feet across and weighs approximately 456 lbs, flew 9,000 miles on a chartered 747-200 aircraft from Durban, South Africa through Cape Verde, Africa, to Atlanta. The manta ray was under the care and supervision of Georgia Aquarium and uShaka Marine World professional staff and maintained by a highly advanced marine life support system.

“The Georgia Aquarium’s success in moving whale sharks across the world gave us confidence that this was the right thing to do,” said Dr. Mark Penning, executive director of uShaka Marine World. “We see this as a perfect opportunity to create an international partnership and continue Nandi’s incredible story, raising worldwide awareness about manta rays.”

Nandi was rescued from shark nets off the coast of Durban, South Africa, in April 2007 and rehabilitated by uShaka Marine World, the largest marine park in Africa. She has lived in uShaka for the past year, educating and inspiring conservation in more than 500,000 people.

Manta rays are the largest rays in the sea, but Nandi was young when she was rescued, measuring just more than eight feet across and weighing around 245 lbs. She had since outgrown her 580,000 gallon exhibit. In order to raise world-wide awareness about manta rays, Georgia Aquarium and uShaka created an international partnership to bring Nandi from South Africa to Georgia Aquarium.

“No one has ever done this before,” said Leven. “Flying the world’s largest ray, a manta ray, from one side of the world to the other and housing it in a U.S. aquarium for the first time is incredible. Having the opportunity to work with this animal and grow our understanding of this strange yet gentle giant will be an opportunity of a lifetime.

About manta rays The manta ray is the largest of all rays, weighing up to 6,000 lbs and measuring up to 26 feet in width. It has a unique body shape, with an extremely broad head and an enormous, wide mouth flanked by two broad, flexible lobes. These fins are kept rolled and pointed forward, except when the manta is feeding. Its tail is whip-like, but short, and does not have a barb or spine. The manta ray is primarily a plankton feeder, but also consumes small and moderate-sized fishes. It is listed as “near threatened” on the IUCN Red List.