World's Reef Fishes Tussling With Human Overpopulation; 'The Results Of The Study Were Stunning' 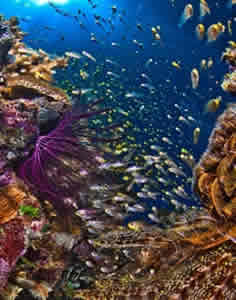 HALIFAX, Canada -- "Coral reefs provide a range of critical goods and services to humanityâeverything from nutrient cycling to food production to coast protection to economic revenues through tourism," says Camilo Mora at Dalhousie University and lead researcher of the study. "Yet the complex nature and large-scale distribution of coral reefs is challenging scientists to understand if this natural ecosystem will continue working to deliver goods and services given the ongoing loss of biodiversity in coral reefs."

"Numerous experiments have showed that biodiversity has positive effects on several ecosystem processes, although the number of species required to ensure the functionality of a given process is fairly low, as many species often have similar ecological roles," says Michel Loreau from McGill University, a co-author of the study. "What remains largely unknown, however, is whether the results of experimental studies reflect what happens in real ecosystems."

To fill this unknown, 55 researchers, in a two-year study, collected the necessary data to determine whether biodiversity influences the efficiency of reef fish systems to produce biomass, and if so, elucidate the role of humans in such a linkage. The team collected demographic data on human populations as well as environmental and biological data on the identity of species, their abundances and body sizes in almost two thousand coral reef locations worldwide. The data on abundance and body size were used to calculate the cumulative weight of all fishes on each reef (also called standing biomass), which is one of the main services reef fishes provide to humanity through food supply but also a very close proxy for how effectively ecosystems produce biomass.

"The results of the study were stunning," says co-author Kevin Gaston at Sheffield University. "While experimental studies have elucidated that the biomass production of ecosystems stabilizes after a certain number of species is reached, this field study demonstrated that the production of biomass in reef fish systems did not saturate with the addition of new species."

"This study shows, quite simply, that the more biodiversity, the better," says co-author Marah Hardt with OceanInk. "The benefits appear limitless, if we allow ecosystems to operate at their full potential."

"The reasons leading to a non-saturating relationship between diversity and biomass production are intriguing," says coauthor Michel Kulbicki at the French Institute for Research and Development. "Nevertheless, this strong relationship clearly indicates that species interact in such a way that their combined effect is larger than the addition of their individual parts and that the loss of species can have far-reaching consequences in the functioning of coral reefs."

The study also demonstrated that standing biomass reduced with increasing human density, although for the same number of people the reduction of biomass was significantly larger in more diverse ecosystems. The authors presume that the stronger deleterious effect of humanity on more diverse reefs is due to the selective extirpation of large fishes, which are often more efficient at turning food into biomass and lack competitors precluding their ecological replacement by other species.

"It's been usual to expect that diverse ecosystems could lose a few species without it mattering very much because the high redundancy of species should allow to replace any species that is lost," said Peter F. Sale, assistant director of the Institute for Water, Environment and Health of the United Nations University, who was not involved in the study. "The results of this study now suggest that we do not have such insurance and that reef ecosystems are at greater risk from human pressures than we previously thought."

The study documented that the deleterious effect of humanity on reef fish systems can be widespread, as some 75% of the world's coral reefs are near human settlements and could worsen, as 82% of countries with coral reefs are expected to double their human populations within the next 50 to 100 years.

"Human overpopulation is a very sensitive topic across endeavors from science to religion and politics," Mora says. "Unfortunately, we find again and again that our global population cannot be sustainably supported without the deterioration of the world's natural resources and the resulting backlash on human welfare. Thus, identifying socially and politically acceptable solutions to curb human population growth is at the core of finding ultimate solutions for the protection of biodiversity and the prevention of unnecessary hardship."

"We found that dense human populations were associated with heavy overfishing, land use, and coastal development," says coauthor David Booth at the University of Technology, Sydney. "This highlights the challenge behind the management required to adequately protect coral reefs and the need to focus on alternative economic and policy tools that address the root drivers of reef degradation."

"This is a critical situation," says coauthor Sebastian Ferse from the Leibniz Center of Tropical Marine Ecology. "It underlines once again that current management approaches are insufficient to protect marine biodiversity on a large scale, and that holistic approaches combining natural and social systems are needed."

"Not everything was doom and gloom," says coauthor Maria Beger at the University of Queensland. The study reported that at least 25% of the world's reefs remain distant from direct human effects. Those reefs are located on small and isolated areas where human habitation is harsh. "These few reefs are in stark contrast with degraded sites, and may still be able to act as sources to replenish others. This is a fortunate situation that can buy us some time while we figure out effective solutions to this coral reef crisis," she adds.

"Coral reefs are the most diverse ecosystem on the planet, hosting thousands of species and generating numerous goods and services to millions of people worldwide," says Enric Sala, a National Geographic fellow and co-author of the study. "The future of coral reefs and the services they provide to a growing human population depend on how soon countries become seriously committed to regulating human threats."