Scientists: 'Engine' Of The Coral Reef Discovered; Farmed Algae 'Like An Alien' 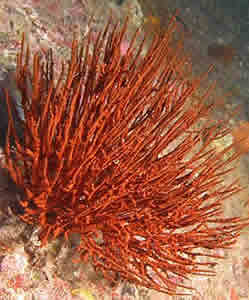 This is an image of a Hawaiian Black Coral, Antipathes griggi. Credit: Daniel Wagner, HIMB

MANOA, Hawaii -- Researchers at the Hawai'i Institute of Marine Biology (HIMB), an organized research unit in the University of Hawai'i at Mānoa's School of Ocean and Earth Science and Technology have made a remarkable new discovery.

When most people envision coral, they typically think of shallow-water reef-building corals found along beaches and tropical nearshore habitats. These "typical" corals are dependent upon photosynthetic algae (also known as Symbiodinium or zooxanthellae) found in their tissues to obtain nutrients to live off of. In deeper less known waters, closely related black corals were considered to be void of these algae because of the light shortage to support photosynthesis. In fact, all black corals were considered to lack Symbiodinium (algae), because they are typically found at great depths where light levels are very low. Black corals are of substantial cultural and economic importance in commercially for the precious coral jewelry industry in deep waters off Maui, and black coral is considered the official gemstone of the State of Hawai'i. Even though most people have heard of black coral jewelry, very few ever get to see these corals in their natural environments because of the depths they are found in. As a result of their remote habitats, very little is known about the basic biology of black corals.

Scientists at the Hawai'i Institute of Marine Biology (HIMB), examined 14 black coral species collected between 10 and 396 m from around Hawai'i for the presence of algae using molecular and histological (tissue studies) techniques. Surprisingly, 71% of the examined species were found to contain algae, even approaching 400 m. These black corals exhibited very similar traits to those of corals commonly found in shallow-water (use of algae). PhD student, Daniel Wagner at HIMB was the one who led the investigation. He states: "because black corals are predominantly found in deep and dark environments, most people assumed that they could not harbor these photosynthetic symbiotic algae. At this point we do not know how these algae are able to exist in extreme environments, and it certainly highlights how little we know about deep reefs."

This is a new and important discovery for coral biology, representing the deepest record of Symbiodinium to date. This research also implies that some members of these algae have extremely diverse habitat preferences and broad environmental ranges. The prestigious Royal Society will be publishing the full research report in their journal, Proceedings of the Royal Society B this month.