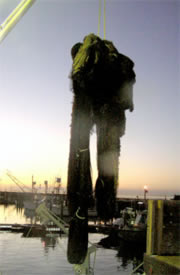 A 4,000-pound seine net is offloaded after being found in the waters around the Channel Islands (photo Jennifer Renzullo)

DAVIS, California -- Scuba divers helped recover nearly 10 tons of lost and abandoned fishing gear from the waters around the California Channel Islands, in the first year of a unique project based at UC Davis. The clean-up included nearly 250 commercial lobster traps, many fishing rods and sport traps, and a huge fishing net covering 5,000 square feet of the seafloor.

"Our priority in the pilot year of the California Derelict Fishing Gear Removal Project was simply to get the project off the ground," said UC Davis wildlife health expert Kirsten Gilardi. "We had no idea that in the process of testing and refining our methods, we would find and remove as much derelict fishing gear as we did."

Lost and abandoned fishing gear can be dangerous to wildlife, boaters and divers. Derelict nets in particular can entrap fish, sharks and marine mammals, as well as divers. Similar projects in Washington and Hawaii have removed hundreds of tons of derelict fishing gear, but this is the first such program in California.

An important goal of the UC Davis project was to work cooperatively with fishermen to locate derelict gear and establish volunteer reporting among the fishing and maritime communities. Commercial fishermen Mark Brubaker and Kenny Hill of Santa Barbara and Mike Neil of San Diego were hired to conduct the gear removal work in the field. Volunteer scientific divers from Long Beach Aquarium of the Pacific and Humboldt State University helped test field-survey methods.

The pilot project was funded by California's Ocean Protection Council through the California State Coastal Conservancy, and by the National Oceanic and Atmospheric Administration (NOAA) Marine Debris Program. The Channel Islands National Marine Sanctuary and Channel Islands National Park authorized the work. The project is managed by the SeaDoc Society, a marine ecosystem health program of the UC Davis Wildlife Health Center.

Between May and October, the fishermen used scuba equipment and an underwater scooter to search for and recover derelict fishing gear in 20 to 100 feet of water around Santa Rosa, Santa Cruz, Anacapa and Santa Catalina islands. When they located debris, they raised it to the surface with float bags and winches, then took it to shore by boat. Once on shore, reusable material was returned to commercial fishermen. Non-reusable material was sent to a landfill.

The huge fishing net was a purse seine net -- the type used to catch anchovies or sardines. It weighed 4,000 pounds and was snagged on a rocky reef in 80 to 100 feet of water at the eastern end of Santa Rosa Island.

Of almost 550 pieces of fishing equipment collected in five weeks of work in the water, many were reusable commercial lobster traps. With traps costing $60 to $100 each, Gilardi said, the recovery work saved California lobster fishermen at least $6,000 in materials costs.

Lobster traps are lost when they are carried away by storms or run over by boats. To reduce the potential for "ghost fishing" by lost traps, commercial fishermen fit the trap doors with devices that eventually disintegrate underwater. The doors open and confined lobsters escape unharmed. Of the derelict traps recovered in this project, some of those collected soon after the close of the 2005-2006 commercial lobster season contained live lobsters, whereas all the traps collected several months post-season were open and empty. That indicates the safety-release system is working, Gilardi said.