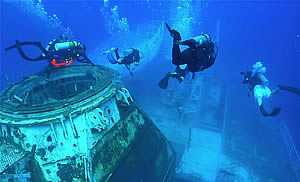 Divers on the Vandenberg.

KEY WEST, Florida -- The world’s second-largest ship ever sunk as an artificial reef is to become an underwater racetrack during the third annual Vandenberg Underwater Grand Prix, set for Friday through Sunday, May 18-20.

Participants using diver-propulsion vehicles are to race around the superstructure of the 523-foot-long Gen. Hoyt S. Vandenberg, a former military troop transport and missile-tracking ship.

The Vandenberg was sunk in 2009 approximately seven miles off Key West. The bottom of its hull rests on sand in 150 feet of water, but the massive ship’s superstructure extends to about 45 feet below the surface.

Saturday’s events begin at 9 a.m. and include scooter demonstrations, race practice, manufacturer races and diver-propulsion vehicle certification for any racers who are not yet DPV certified. The action is headquartered at the lagoon at Florida Keys Community College, 5901 College Road.

The grand prix race is to begin at 8:30 a.m. Sunday, May 20, at the dock at Seaduction Dive Center, 1605 N. Roosevelt Blvd. Divers are to race around the top of the Vandenberg’s superstructure, competing in multiple classes to achieve the fastest speeds while staying within safety parameters.

An awards ceremony is scheduled at the Seaduction dock following the race.

Race entry fees are $50 per diver. Discounts are available at the event’s host properties, the Lexington Hotel and Quality Inn in Key West. Reference the Wreck Racing League when booking.