Ocean Core 'Treasures' Stored At Texas A&M's IODP Repository; 'It's A Slice Through The Layers' 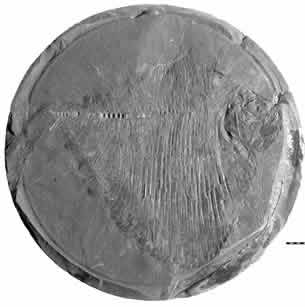 ALBERTA, Canada -- Edmonton - Searching for a different kind of riches in the ground, an oil company made a priceless find it never expected.

Working in west-central Alberta, the now defunct Cequel Energy Inc. company thrust a 7.5-centimetre-wide drill more than 1,300 metres into the ground. When the tube pulled up a sample of earth, it revealed a 96-million-year-old fish fossil neatly encircled in the core sample - only the very tip of the fish's snout and tail were cut off by the drill.

"It was incredibly lucky. Sometimes in a core sample you'll find a bone or parts of a bone, but I can't ever remember finding a whole, intact fossil. It's really quite amazing," said Alison Murray, a paleontologist at the University of Alberta.

Not only were the circumstances of the discovery amazing, Murray added, but the fossil represents a new genus of fish. Found just south of Grande Prairie, in an area known as the Dunvegan Formation, Tycheroichthys dunveganensis (meaning lucky fish of the Dunvegan) belongs to an extinct group of fishes, the Paraclupeidae, which are related to the modern-day herrings. It is the first time this group, which is known to have existed in areas around Lebanon and Brazil, has been found in Canada.

"This fish is what we call a list type. It's a single specimen, the only one of its kind, and that makes it priceless," said Murray, adding that she wouldn't put a price value on the specimen even if she had to, as it is illegal to sell fossils found in Alberta.

Murray and a team of paleontologists from across Canada pieced together the history of the fish and published their findings recently in the Canadian Journal of Earth Sciences.

The researchers believe the fish comes from the Western Interior Seaway, a shallow marine sea that stretched from the Gulf of Mexico to the Arctic Ocean, covering the majority of Alberta during the latter part of the Cretaceous period (110 to 65 million years ago).

"We don't have many articulated fish specimens from that period, and this find gives us a clue to the evolution of this family of fishes," Murray added.

unlike small or fragmented fossils of oysters and snail shells, for example - are rarely preserved because they tend to get eaten or broken apart by waves and currents.

The Dunvegan fossil was extracted from the ground in 1988 and eventually came to Murray and Stephen Cumbaa, a co-author of the paper, a few years ago when Murray was a research assistant at the Canadian Museum of Nature in Ottawa. The fossil now sits in a locked cabinet reserved for the most valuable specimens in the museum.