Study Helps Preserve Arctic Whale, Eskimo Subsistence Hunt; 'Science Was On Our Side' 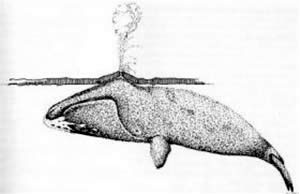 Illustration of how the bowhead whale uses its "bow"-shaped head to break through the ice. Credit: Craig George, Department of Wildlife Management, AK

-- The bowhead whale, devastated in the 19th and early 20th centuries by commercial whaling fleets, has been a food staple for Eskimos and other indigenous arctic peoples dating to prehistoric times. Due in part to research done by Purdue University professor John Bickham, the International Whaling Commission ruled last week to allow Eskimos to harvest 56 whales per year, the same quota that had been in place but had expired.

"Eskimos have been whaling for more than 2,000 years and have never endangered the bowhead whale," said Bickham, the professor of forestry and natural resources who presented data from a study he co-authored at the scientific meeting of the commission in May.

Bickham said the bowhead's population has recently been increasing by 3 percent a year, even while being harvested by subsistence hunters. The bowhead, he said, which can be 50 feet long and weigh 50 tons, should be able to increase its 11,000 population under the quota.

At the commission meeting, which ended May 31, the 76 member nations voted to renew the subsistence hunt quota for the next five years. Members of the Alaska Eskimo Whaling Commission, worried the quota might not be renewed, celebrated the news.

"Science was on our side, and the commissions listened to what the scientific committee told them," said Edward Itta, mayor of North Slope Borough, Alaska.

Bickham, also director of Purdue's Center for the Environment, specializes in mammalian genetics and became involved with the research while still at Texas A&M University, along with doctoral student Ryan Huebinger. Researchers from Norway, Alaska and the continental United States collaborated in the study. Bickham said the study is encouraging because it shows multinational scientific solidarity on a controversial issue.

"This is an example of where science and management actually affect people's lives," Bickham said. "In Indiana, for example, if people have to cut back on the number of white-tailed deer or other game species that can be hunted, there is little effect on people's lives. In this case, if the bowhead hunt is stopped or the quota reduced significantly, it could really impact people's lives in a major way, because the whale is an essential part of the Eskimo food and culture."

The study, published last month in Molecular Ecology, measured genetic variation of bowhead whales in order to shed light on the animal's population makeup, or stock structure. This information is vital for effective management, Bickham said. If, for example, there were distinct subpopulations, the quota would likely be lowered to protect these groups, Bickham said.

Researchers typically calculate genetic variation by sampling geographically-separated populations of animals, which was not possible with the bowhead. Instead, the team developed a novel technique for studying migratory animals, which contrasts minute genetic differences via a series of complex calculations. The method could be used to study other migrants like geese or salmon, Bickham said.

Gathering genetic material from whales harvested by Eskimos as they migrated past Barrow, Alaska, in the spring and fall, researchers did detect an unexpected level of genetic variation but speculate it stems from the whale's unusual age structure, as opposed to unique subpopulations. Bickham said he suspects the high commercial-whaling mortality rates of the 19th and early 20th centuries may be one reason for the unexpected variation.

Whalers of this period, from various developed countries, hunted many species to the brink of extinction, including the bowhead. This left a relatively small number of whales to repopulate, which could have helped cause present-day levels of genetic variation. However, more work is necessary to confirm this, Bickham said.

The bowhead, Balaena mysticetus, lives farther north than any other whale and has the lowest core body temperature. It uses its bow-shaped head to crack through the ice as it migrates north into the Beaufort Sea every summer and south into the Bering Sea for winter. Like all baleen whales, it uses specialized fibrous materials in its mouth to sift plankton from sea water.

Bickham said some bowheads may live around 200 years, and the discovery of stone spearheads lodged in living whales indicates that some pre-date the whaling era. Despite being the most-studied baleen whale, much remains a mystery.