Scientist: Oceans may soon be more corrosive than when the dinosaurs died 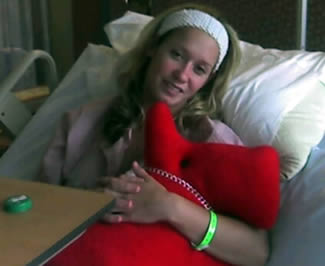 Dallas Friday is shown recovering at a hospital in Singapore in a photo taken Wednesday. (Courtesy of Robin Friday Sr.) 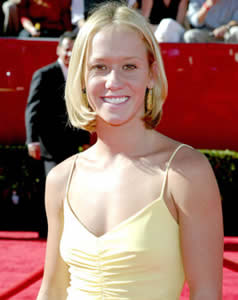 Singapore -- "I feel like I'm the luckiest girl right now," champion wakeboarder Dallas Friday said Wednesday from her hospital bed in Singapore. ". . . I'm just blessed to be alive and have so many people who care. I almost died."

Friday, recovering from a severely fractured left femur and severe breathing problems that put her in intensive care at Changi General Hospital, said in a telephone interview that she is "doing way better, way better."

The 20-year-old from Orlando, injured Oct. 1 when she crashed during the final event in the 2006 Wakeboard World Cup series, said friends and fans from all over the world had sent her e-mails and prayers.

Considered the world's greatest women's wakeboarder, Friday said she hopes to compete Memorial Day weekend in Georgia at the 48th Masters Water Ski and Wakeboard Tournament, which she has won five years in a row.

"I'm going to be recovered, and I am going to wakeboard again one day," Friday said.

In fact, on Sunday, when doctors took her off the respirator and removed her breathing tube, one of the first questions Friday asked her father was, "Dad, would you mind if I continue to ride?"

Yet even Friday and her father, Robin Friday Sr., who is in Singapore with her, acknowledge the recovery will take time.

On Wednesday, a doctor at the hospital showed her an X-ray of her left femur for the first time since she broke it while performing a complex jump called a "whirlybird."

When Friday crashed, she screamed and held her leg, which she said felt like "Jell-O."

"Once I got to the dock, everybody was shaken up," Friday said. "I kept my cool. I held my leg together. I stayed calm, and then I went into surgery. I don't remember the next five days after that."

On Wednesday, a doctor told her that she sustained at least seven fractures in her leg.

"It [the X-ray] looks like a Christmas tree -- like a modern-art Christmas tree," Robin Friday Sr. said. "It just branches out into every different direction imaginable."

Her voice still sounds raspy from the tube that helped her breathe for six days.

But signs of progress have lifted the family's spirits. On Wednesday, Dallas Friday walked with the aid of crutches for the first time since her crash.

"Her color is good; her mind is thinking clear; her appetite is great," Robin Friday Sr. said. "To see her big, brown, beautiful eyes looking at me again is just a joy beyond description."

Dallas now has a private room in the hospital's general ward. Get-well cards and flowers -- including a recently arrived bouquet of three dozen pink and white roses -- have lightened the mood. Her father also has sung her hymns, as well as one of their favorite songs, "Edelweiss."

Dallas has felt homesick, but she may be able to leave Singapore and return home as early as Tuesday.

"I'm hanging in there," she said. "And I just want to thank God and everyone for praying for me and keeping me in their hearts. I can't even describe how much I appreciate it and how much it means to me.