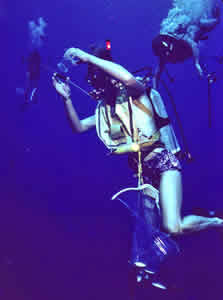 Dr. Hamner is credited with the ‘birth’ of in situ oceanographic observation

This award is presented annually to an individual from the scientific diving community who has made a significant contribution in advancing underwater science and technology.

Dr. Hamner will be presented the award at the 29th annual AAUS Symposium banquet on Saturday, March 27th at the Waikiki Aquarium in Honolulu, Hawaii.

William Hamner received his Bachelor of Arts in Zoology from Yale University in 1961 and his Ph.D. in Zoology from the University of California, Los Angeles, in 1965. He taught vertebrate zoology and conducted research on birds at UC Davis from 1966 to 1974 as an Assistant and Associate Professor of Zoology and Environmental Science. In 1971 he and his graduate students conducted field research in the Gulf Stream off Bimini, Bahamas, on gelatinous zooplankton, using bluewater SCUBA techniques.

With what many would consider the ‘birth’ of in situ oceanographic observation, Dr. Hamner introduced the novel idea of using SCUBA while drifting in the surface waters of the Gulf Stream to make the first observations and measurements of fragile gelatinous plankton in an open ocean setting.

Dr. Hamner’s development of blue-water SCUBA techniques in the early 1970s embodies the mission of the American Academy of Underwater Sciences “…to facilitate the development of safe and productive scientific divers through education, research, advocacy, and the advancement of standards for scientific diving practices, certifications and operations.”

In 1979 Hamner became a Professor in the Department of Ecology and Evolutionary Biology at UCLA. He retired in 2005, but continues to conduct field research on jellyfish, crustaceans and other marine organisms. Together, Dr. Hamner and his wife and scientific colleague Peggy Hamner direct marine science outreach programs for teachers grades K-12 with funding from the National Science Foundation. Their research has been featured in National Geographic Magazine and in the IMAX film, "The Living Sea."

The Academy recognizes the overwhelming impact of blue-water SCUBA on the advancement of ocean ecology in general. This contribution to in situ ocean science was recognized as one of the major advances in biological oceanography by the National Science Foundation at its celebration of 50 years of NSF-sponsored ocean research. On behalf of the American Academy of Underwater Sciences and the broader marine sciences community around the world, we are pleased to present to Dr. William M. Hamner Ph.D., the Scientific Diving Lifetime Achievement Award for Scientific Diving Leadership in 2009.