Stranded Dolphins Exhibit Bubbles, And Ability To Recover; Marine Mammals Not Immune From The 'Bends' 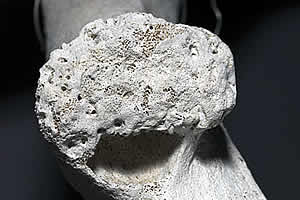 WOODS HOLE, Massachusetts -- Any diver returning from ocean depths knows about the hazard of decompression sickness (DCS) or "the bends." As the diver ascends and the ocean pressure decreases, gases that were absorbed by the body during the dive, come out of solution and, if the ascent is too rapid, can cause bubbles to form in the body. DCS causes many symptoms, and its effects may vary from joint pain and rashes to paralysis and death.

But how do marine mammals, whose very survival depends on regular diving, manage to avoid DCS? Do they, indeed, avoid it?

In April 2010, the Woods Hole Oceanographic Institution's Marine Mammal Center (MMC) invited the world's experts in human diving and marine-mammal diving physiology to convene for a three-day workshop to discuss the issue of how marine mammals manage gas under pressure. Twenty-eight researchers discussed and debated the current state of knowledge on diving marine mammal gas kineticsâthe rates of the change in the concentration of gases in their bodies.

The workshop resulted in a paper, "Deadly diving? Physiological and behavioural management of decompression stress in diving mammals," which was published Dec. 21, 2011, online in the Proceedings of the Royal Society B.

"Until recently the dogma was that marine mammals have anatomical and physiological and behavioral adaptations to make the bends not a problem," said MMC Director Michael Moore. "There is no evidence that marine mammals get the bends routinely, but a look at the most recent studies suggest that they are actively avoiding rather than simply not having issues with decompression."

Researchers began to question the conventional wisdom after examining beaked whales that had stranded on the Canary Islands in 2002. A necropsy of those animals turned up evidence of damage from gas bubbles. The animals had stranded after exposure to sonar from nearby naval exercises. This led scientists to think that diving marine mammals might deal with the presence of nitrogen bubbles more frequently than previously thought, and that the animals' response strategies might involve physiological trade-offs depending on situational variables. In other words, the animals likely manage their nitrogen load and probably have greater variation in their blood nitrogen levels than previously believed.

Because the animals spend so much time below the ocean's surface, understanding the behavior of diving marine mammals is quite challenging. The use of innovative technology is helping to advance the science. At WHOI, scientists have used a CT scanner to examine marine mammal cadavers at different pressures to better understand the behavior of gases in the lungs and "get some idea at what depth the anatomy is shut off from further pressure-kinetics issues," Moore said. For other studies, Moore and his colleagues were able to acquire a portable veterinary ultrasound unit to look at the presence or absence of gas in live, stranded dolphins.

There's still a lot to be learned, including whether live animals have circulating bubbles in their systems that they are managing. If they do, says Moore, noise impacts and other stressors that push the animal from a normal management situation to an abnormal situation become more of a concern. "When a human diver has some bubble issues, what will they do? They will either climb into a recompression chamber so that they can recompress and then come back more slowly, or they'll just grab another tank and go back down for a while and . . . and just let things sort themselves out. What does a dolphin do normally when it's surfaced? The next things to do is to dive, and the one place you can't do that is in shallow water or most particularly if you are beached."