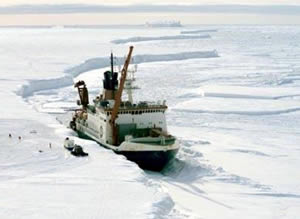 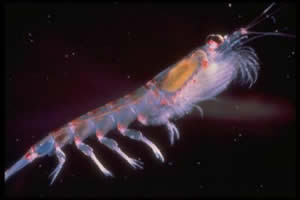 Krill (Euphausia superba) are small, shrimp-like animals that grow up to about 6 cm in length and live for up to 5 years. Credit Uwe Kils

BREMERHAVEN, Germany -- A ten-week expedition to the Lazarev Sea and the eastern part of the Weddell Sea opens this year's Antarctic research season of the German research vessel Polarstern. On the evening of November 28, just some two hours after an official ceremony at the Berlin Museum of Natural History honouring Polarstern's 25th anniversary of service, the research vessel will begin its 24th scientific voyage to the Southern Ocean from Cape Town. The 53 scientists from eight nations aboard Polarstern will focus much of their work on climate-related research as part of the International Polar Year. In addition, Polarstern will also supply the German Neumayer Station during the first leg of the trip, and accompany the freighter Ã¢€˜Naja Arctica' which will deliver construction materials for the new research station Neumayer III to the Antarctic. On February 4, 2008, Polarstern is expected to return to Cape Town.

"Our research projects will improve the understanding of physical and biological processes associated with the Antarctic Circumpolar Current and the Weddell Gyre, both of which play a key role for the earth's climate", explains chief scientist Prof Dr Ulrich Bathmann of the Alfred Wegener Institute for Polar and Marine Research in the Helmholtz Association, referring to the central goal of the expedition. Plankton algae from these two marine currents south of the Atlantic Ocean are absorbing significant amounts of the climate gas carbon dioxide through their growth during the summer. By sinking to the Antarctic deep sea, these algae are subsequently transferring the carbon dioxide to the seafloor, where, in some cases below 4000 meter water depth, they provide food for bottom dwelling organisms. "The efficiency of this biological pump is controlled, for example, by nutrients, by physical dynamics in the ocean surface layer, and by the species of algae involved", says Bathmann. "We have to investigate these complex interactions further, in order to optimise scientific climate predictions."

The region covered by Polarstern during this mission extends from 40 to 70 degrees southern latitude, i.e. from the so-called subtropical convergence, a hydrological boundary separating the Antarctic from the Atlantic Ocean, and the Antarctic continent. The scientific studies aboard Polarstern, aside from being highly relevant for climate research, are part of three large international programmes within the International Polar Year framework.

The research programme SCACE (Synoptic Circum-Antarctic Climate and Ecosystem Study) explores physical and biological interrelations in the Antarctic Circumpolar Current, comparing recently recorded parameters with historical data. "The Antarctic Circumpolar Current measures several hundred kilometres across, surrounding the Antarctic continent and connecting all large oceans", explains Ulrich Bathmann. "This large ocean current transports both heat energy and fresh water, plays a central role in the ocean-wide cycles of dissolved material, and contains a series of distinct ecosystems that may displace each other with changing climate regimes. Plankton algae involved have a high potential for absorbing atmospheric carbon dioxide", the marine biologist adds about the significance of the Antarctic Circumpolar Current for the functioning of the system Earth. At the same time, Southern Ocean natural systems themselves are extremely sensitive to global changes. Hence, one of the central tasks of the SCACE programme will consist in collecting a unique data set that can serve as a benchmark for comparison with existing data to identify and quantify polar changes.

A special role for food webs in the Southern Ocean is played by krill. This group of crustaceans, which may also become interesting for economic purposes, has been relatively well studied in some few regions of the Antarctic, for instance surrounding the Antarctic Peninsula. However, as some of the results revealed, the krill's seasonal survival mechanisms show large regional variation, so extrapolations from local studies to a wider area are hardly possible. For this reason, the research project LAKRIS (Lazarev Sea Krill Study) will be a detailed investigation into the life cycle, distribution and physiology of krill populations in the Lazarev Sea. According to existing information, krill is very abundant in this area. "In this case also, our primary question of interest is the krill's ability to adapt to potential environmental changes", explains Ulrich Bathmann the connection to climate research. The LAKRIS study will complement similar large-scale investigations in other regions of the Antarctic.

While the continental shelf regions surrounding Antarctica are relatively well known, the Antarctic deep sea remains practically unexplored. Large areas of the seafloor around Antarctica, however, are deep-sea environments. Led by Prof Dr Angelika Brandt of the Zoological Institute of the University of Hamburg the third expedition project, ANDEEP-SYSTCO, tries to shed light on this unknown world. The acronym envelops an Antarctic deep-sea research programme, exploring various regions of the Southern Ocean at several thousand meters of depth with the primary goal of analysing interactions among atmosphere, water column and seafloor. "Since deep sea research continues to take us to unknown worlds, we are expecting some new and fascinating insights regarding biological diversity in the ocean, perhaps even the discovery of previously unknown species", explains Bathmann. The Polarstern expedition thus is part of two major global research initiatives studying marine biodiversity: the 'Census of Antarctic Marine Life' (CAML), and the 'Census of the Diversity of Abyssal Marine Life' (CeDAMar), both of which are sub-programmes of the so-called Ã¢€˜Census of Marine Life'.

Before Polarstern will depart from Cape Town on November 28, however, Ulrich Bathmann will take part in the ship's anniversary celebration in Berlin -- not in person, but live on the telephone. "This ship has enabled so many extraordinary scientific insights, that it does deserve to be honoured", says the scientist who attended many expeditions aboard Polarstern. "It's a great pleasure to be able to make a personal contribution."