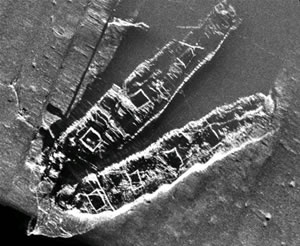 Schooners Frank A. Palmer and the Louise B. Crary (Photo: NOAA/SBNMS and NURC-UConn )

SCITUATE, Massachusetts -- The wrecks of the coal schooners Frank A. Palmer and Louise B. Crary, which rest on the Stellwagen Bank National Marine Sanctuary seafloor, have been listed on the National Register of Historic Places, the nation's official list of cultural resources worthy of preservation, officials from the National Oceanic and Atmospheric Administration (NOAA) announced today.

In compliance with President Bush's Preserve America Executive Order, NOAA is stepping up efforts to inventory, preserve and protect historic resources in the agency's care, from shipwrecks to historic buildings.

The four-masted schooner Frank A. Palmer and the five-masted schooner Louise B. Crary qualified for listing on the National Register of Historic Places by meeting three criteria:

The Maine-built wooden-hulled schooners Frank A. Palmer and Louise B. Crary played a vital role as coal carriers during the urbanization and industrialization of New England at the beginning of the twentieth century. During their relatively short careers, the schooners carried thousands of tons of coal used to generate the steam power in locomotives and electric power plants that were dramatically changing American life. The schooners exemplify a critical transportation network that supplied New England's energy needs and their involvement in the coal trade connects them to Americans throughout the East Coast.

The schooners rest on the seafloor, their bows touching in the same orientation in which they plunged to the seafloor after their collision in 1902. A miscalculation by the Louise B. Crary's mate caused the schooner to smash into the Palmer's portside bow. Within minutes of the collision, six of the 21 sailors onboard the vessels lost their lives when the ships plummeted to the bottom. The remaining 15 sailors made it into the Palmer's longboat with only the clothing they were wearing, but without food or water. During the following four days, five more men perished from exposure in the open boat before being rescued more than 60 miles east of Cape Cod.

Investigations of the site revealed the vessels' hulls to be nearly intact with rigging splayed across the deck from the toppled masts. At no other located New England coal schooner archaeological site is there the same opportunity to study two vessels with such extensive preservation. How the schooners sank, and the condition of the wreck site, provide a unique archaeological opportunity to compare two similar, but slightly different vessels, engaged in the same trade.

Scientists from NOAA and the University of Connecticut confirmed the Frank A. Palmer and Louise B. Crary's location within the sanctuary in 2002 based upon the coordinates supplied by maritime researchers H. Arnold Carr and John P. Fish. Since then, NOAA and University of Connecticut scientists and archaeologists have visited the wrecks annually with a remotely operated vehicle to monitor, study and document their condition.

The Stellwagen Bank National Marine Sanctuary and the National Undersea Research Center at the University of Connecticut have been active partners since the sanctuary's designation by Congress in 1992. Technical support from NURC-UConn has been crucial to satisfying the sanctuary's mandate to inventory, assess, nominate to the National Register of Historic Places, interpret, and manage its maritime heritage resources. Through this partnership, NOAA and NURC-UConn scientists have located over a dozen historic shipwrecks in the sanctuary and completed detailed investigations of the sites with side scan sonar, remotely operated vehicles, and autonomous underwater vehicles. The wreck of the Palmer and the Crary is the second shipwreck site in the sanctuary to be included on the National Register, administered by the National Park Service, part of the U.S. Department of the Interior. The wreck of the steamship Portland was listed in early 2005.

The schooners' location within the Stellwagen Bank National Marine Sanctuary provides protection unavailable in other federal waters off Massachusetts. Sanctuary regulations prohibit moving, removing or injuring, or any attempt to move, remove, or injure any sanctuary historical resource, including artifacts and pieces from shipwrecks. Anyone violating this regulation is subject to civil penalties.

Congress designated the Stellwagen Bank National Marine Sanctuary in 1992 as "an area of special national significance." Virtually the size of the state of Rhode Island, the sanctuary stretches between Cape Ann and Cape Cod in federal waters off of Massachusetts. The sanctuary is renowned as a major feeding area for marine mammals, particularly humpback whales, and supports an ecosystem of diverse wildlife.

NOAA's National Undersea Research Program funds six research centers around the country at major universities. The National Undersea Research Center for the North Atlantic and Great Lakes is located at the University of Connecticut at Avery Point (NURC-UConn). This center supports and conducts research in the waters off the northeast coast of the U.S. including the Gulf of Maine, Georges Bank, Southern New England Bight including Long Island Sound and the Great Lakes.

NOAA, an agency of the U.S. Department of Commerce, is dedicated to enhancing economic security and national safety through the prediction and research of weather and climate-related events and providing environmental stewardship of the nation's coastal and marine resources. Through the emerging Global Earth Observation System of Systems (GEOSS), NOAA is working with its federal partners, 61 countries and the European Commission to develop a global network that is as integrated as the planet it observes, predicts and protects.