Researchers: Acid Rain Has A Disproportionate Impact On Coastal Waters; 'It's Affecting The Ocean'

Research: Recovery From Acid Rain 'Much Slower Than Expected'

Researchers: Scheme To Remove Acid From The Ocean Key To Lowering C02; 'Turn Back The Clock' 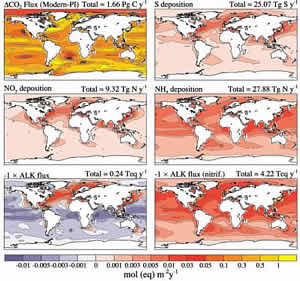 Maps depict the model-estimated atmospheric deposition rates of carbon, nitrogen and sulfur; alkalinity; and potential alkalinity to the ocean. (WHOI)

WOODS HOLE, Massachusetts -- The release of sulfur and nitrogen into the atmosphere by power plants and agricultural activities plays a minor role in making the ocean more acidic on a global scale, but the impact is greatly amplified in the shallower waters of the coastal ocean, according to new research by atmospheric and marine chemists.

Ocean “acidification” occurs when chemical compounds such as carbon dioxide, sulfur, or nitrogen mix with seawater, a process which lowers the pH and reduces the storage of carbon. Ocean acidification hampers the ability of marine organisms—such as sea urchins, corals, and certain types of plankton—to harness calcium carbonate for making hard outer shells or “exoskeletons.” These organisms provide essential food and habitat to other species, so their demise could affect entire ocean ecosystems.

The findings were published this week in the online “early edition” of the Proceedings of the National Academy of Sciences; a printed version will be issued later this month.

“Acid rain isn’t just a problem of the land; it’s also affecting the ocean,” said Scott Doney, lead author of the study and a senior scientist in the Department of Marine Chemistry and Geochemistry at the Woods Hole Oceanographic Institution (WHOI). “That effect is most pronounced near the coasts, which are already some of the most heavily affected and vulnerable parts of the ocean due to pollution, over-fishing, and climate change.”

In addition to acidification, excess nitrogen inputs from the atmosphere promote increased growth of phytoplankton and other marine plants which, in turn, may cause more frequent harmful algal blooms and eutrophication (the creation of oxygen-depleted “dead zones”) in some parts of the ocean.

Doney collaborated on the project with Natalie Mahowald, Jean-Francois Lamarque, and Phil Rasch of the National Center for Atmospheric Research, Richard Feely of the Pacific Marine Environmental Laboratory, Fred Mackenzie of the University of Hawaii, and Ivan Lima of the WHOI Marine Chemistry and Geochemistry Department.

“Most studies have traditionally focused only on fossil fuel emissions and the role of carbon dioxide in ocean acidification, which is certainly the dominant issue,” Doney said. “But no one has really addressed the role of acid rain and nitrogen.”

The research team compiled and analyzed many publicly available data sets on fossil fuel emissions, agricultural, and other atmospheric emissions. They built theoretical and computational models of the ocean and atmosphere to simulate where the nitrogen and sulfur em9/7/2007issions were likely to have the most impact. They also compared their model results with field observations made by other scientists in the coastal waters around the United States.

Farming, livestock husbandry, and the combustion of fossil fuels cause excess sulfur dioxide, ammonia, and nitrogen oxides to be released to the atmosphere, where they are transformed into nitric acid and sulfuric acid. Though much of that acid is deposited on land (since it does not remain in the air for long), some of it can be carried in the air all the way to the coastal ocean.

When nitrogen and sulfur compounds from the atmosphere are mixed into coastal waters, the researchers found, the change in water chemistry was as much as 10 to 50 percent of the total changes caused by acidification from carbon dioxide.

This rain of chemicals changes the chemistry of seawater, with the increase in acidic compounds lowering the pH of the water while reducing the capacity of the upper ocean to store carbon. The most heavily affected areas tend to be downwind of power plants (particularly coal-fired plants) and predominantly on the eastern edges of North America, Europe, and south and east of Asia.

Seawater is slightly basic (pH usually between 7.5 and 8.4), but the ocean surface is already 0.1 pH units lower than it was before the Industrial Revolution. Previous research by Doney and others has suggested that the ocean will become another 0.3 to 0.4 pH units lower by the end of the century, which translates to a 100 to 150 percent increase in acidity.