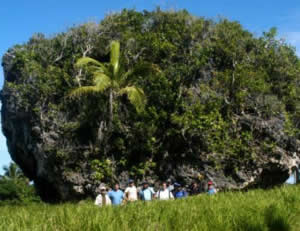 One of the huge erratic boulders found on the western shore of Tonga. Photo courtesy of M. Hornbach 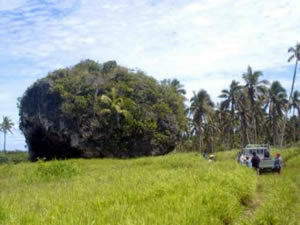 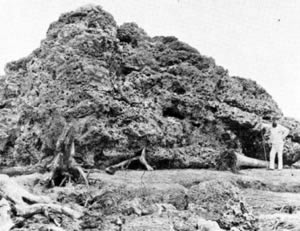 BOULDER, Colorado -- A line of massive boulders on the western shore of Tonga may be evidence of the most powerful volcano-triggered tsunami found to date. Up to 9 meters (30 feet) high and weighing up to 1.6 million kilograms (3.5 million pounds), the seven coral boulders are located 100 to 400 meters (300 to 1,300 feet) from the coast. The house-sized boulders were likely flung ashore by a wave rivaling the 1883 Krakatau tsunami, which is estimated to have towered 35 meters (115 feet) high.

Called erratic boulders, these giant coral rocks did not form at their present location on Tongatapu, Tonga's main island. Because the island is flat, the boulders could not have rolled downhill from elsewhere. The boulders are made of the same reef material found just offshore, which is quite distinct from the island's volcanic soil. In fact, satellite photos show a clear break in the reef opposite one of the biggest boulders. And some of the boulders' coral animals are oriented upside down or sideways instead of toward the sun, as they are on the reef.

Hornbach says the Tongatapu boulders may have reached dry land within the past few thousand years. Though their corals formed roughly 122,000 years ago, they are capped by a sparse layer of soil. And the thick volcanic soils that cover most of western Tongatapu are quite thin near the boulders. This suggests the area was scoured clean by waves in the recent past. Finally, there is no limestone pedestal at the base of the boulders, which should have formed as rain dissolved the coral if the boulders were much older.

Many tsunamis, like the one that struck the Indian Ocean in 2004, are caused by earthquakes. But the boulders' location makes an underwater eruption or submarine slide a more likely culprit. A chain of sunken volcanoes lies just 30 kilometers (20 miles) west of Tongatapu. An explosion or the collapse of the side of a volcano such as that seen at the famous Krakatau eruption in 1883 could trigger a tremendous tsunami.

Another possibility is that a storm surge could have brought the boulders ashore. But that scenario isn't likely. No storms on record have moved rocks this big. Another possibility is that a monster undersea landslide caused the tsunami. But Hornbach's analyses of adjacent seafloor topography point to a volcanic flank collapse as the most probable source of such a wave.

"We think studying erratic boulders is one way of getting better statistics on mega-tsunamis," Hornbach says. "There are a lot of places that have similar underwater volcanoes and people haven't paid much attention to the threat." The researchers have already received reports of more erratic boulders from islands around the Pacific. Future study could indicate how frequently these monster waves occur and which areas are at risk for future tsunamis.

The boulders are such an unusual part of the Tongan landscape that tales of their origins appear in local folklore. According to one legend, the god Maui hurled the boulders ashore in an attempt to kill a giant man-eating fowl.

And though many other Pacific islanders follow the custom of heading uphill after earthquakes, Tongans have no such teachings. Such lore may be useless for near-shore volcanically-generated tsunamis, which arrive too quickly for people to evacuate. Instead, most of Tongatapu's settlements are huddled together on the northern side of the island—away from the brunt of the tsunami threat.