Fishermen: Seal Numbers Out of Control; 'A Really Tricky Line that We Walk' 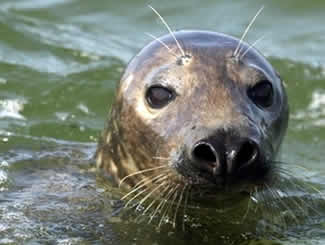 A gray seal pokes his head out of the water in Chatham Harbor in Chatham, Mass.

CHATHAM, Massachusetts -- In the waters and beaches off this Cape Cod town, the shiny scalps and whiskered snouts of the gray seal are everywhere. They bask in the sun, mug for boaters and, fisherman say, eat way too many fish.

The thousands of gray seals off Chatham show the success of a federal law that protects all marine mammals, including the Cape's once-sparse seal population, which had been thinned in part by a killing bounty.

But the 1972 law didn't plan any curbs once populations rebounded, and fishermen say the ubiquitous and voracious seals are destroying their businesses and there's no way to stop them.

"The population is getting out of control," said Ernie Eldredge, a Chatham fisherman for 40 years.

Fishermen have few ideas how to manage the seals without killing them, something that no one is openly advocating and which a public enamored with the friendly animals would not easily accept. Peter Baker of the Cape Cod Commercial Hook Fisherman's Association said he's convinced "there are strategies for managing seal populations that don't include clubbing baby seals."

Robert Prescott, director of the Massachusetts Audubon Society's Wellfleet Bay sanctuary, said fishermen are too quick to blame the seals for declining fish catches. Environmental conditions or overfishing may be much more at fault, he said.

"It's way too complex to just point a finger at the seals," he said.

The most recent population count, in 1999, estimated the local gray seal population at 5,600, and it's certainly increased since then, said Gordon Waring, fisheries research biologist at National Marine Fisheries Service in Woods Hole.

On Thursday, clumps of seals could be seen swimming and sunning themselves on North Beach, just a few hundred yards from shore. Between Monomoy Island and South Beach, seals circled a boat cruising through the channel, with as many as six at time popping their heads up and staring, then edging closer before diving out of sight in the shallow water.

The seals' resurgence began with the 1972 Marine Mammal Protection Act, which forbids the killing of seals, with a few rare exceptions.

The law was passed when marine mammal populations were "dangerously low," and aimed only to bring the mammals back to where they could sustain themselves at healthy levels, said Tanya Dobrzynski, a fishery biologist at the National Oceanic and Atmospheric Administration.

"It just says, 'Get to that (healthy) level,'" Dobrzynski said. "It doesn't prescribe where to go beyond that."

Dobrzynski said that even devising non-lethal methods for protecting the fish from seals is difficult because the law protects the mammals from harassment.

"It's a really tricky line that we walk," she said. "We are in the position of sort of waiting for more guidance from lawmakers on this."

A male gray seal can weigh 800 pounds, and Waring said they've been found with as much as 15 pounds of fish in their stomachs.

Chatham fisherman Paul Bremser said it's no coincidence that as the seals have increased, flounder have all but disappeared from Chatham Harbor. He's also seen huge striped bass with their stomachs eaten out by seals.

Eldredge said his weir traps, a fixed gear that leads fish into a net, were empty all summer. They used to routinely trap 2,000 pounds of fish per day. The seals are at least partly to blame, he said.

"I'm not a scientist, but I know what I observe," he said

Bremser decided he had to do something in July when he was giving a surfing lesson and witnessed a great white shark devour a seal, one of the sharks' preferred foods. More sharks and fewer fish is not something that's good for Chatham, he said.

"Our community has survived on fishing and tourism," he said. "Both are in jeopardy right now if we let this escalate."

Bremser has successfully lobbied officials in Chatham and Eastham to ask their Congressional delegations for money to study the effects of the seals on fish populations.

Chatham's gray seals aren't the first marine mammals to present problems with their abundance. In Oregon and Washington, a booming sea lion population is eating spawning salmon stocks, and officials are drafting a proposal for a "limited selected lethal removal" of the sea lions from the Columbia River.

Prescott, of the Audubon Society, said he understands the dilemma fisherman face, but is unconvinced there's a growing imbalance between seals and fish. He added no scientific paper he's seen proves they're eating valuable commercial species.

Fishermen don't always realize they aren't the sea's only predators, he said.

"They feel they have the right to every single fish in the ocean, and nature doesn't," he said.