Cone Of Poison: The Secret Behind The Cone Snail's Venom Pump 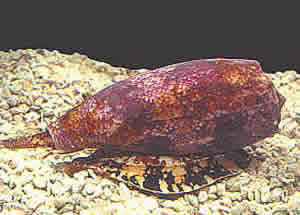 VICTORIA, Australia -- Scientists have discovered the secret of how an amazing sea snail injects its venom after shooting a harpoon-like tooth into its prey â or some unlucky swimmer â at jetliner speeds. The creatures, called cone snails, use a highly specialized structure that instantly pumps the paralyzing venom through the tooth and into its target. Their study appears in ACS' monthly Journal of Proteome Research.

Helena Safavi-Hemami, Anthony Purcell and colleagues note that cone snails live mainly in the shallows of the world's tropical oceans. Prized by sea-shell collectors for their beautiful shells, the snails are up to 9 inches long. Their mouths have a blow-gun-like structure that shoots a barbed dart-like "tooth" at about 400 miles per hour. The tooth injects venom into fish, worms, or other prey. The snails occasionally sting swimmers, causing pain and sometimes death. They can reload the shooter with additional harpoons. The venom is produced in the venom duct, a long tube attached to the harpoon on one end and to the venom bulb in the snail's mouth.